We can judge whether CenturyLink, Inc. (NYSE:CTL) is a good investment right now by following the lead of some of the best investors in the world and piggybacking their ideas. There’s no better way to get these firms’ immense resources and analytical capabilities working for us than to follow their lead into their best ideas. While not all of these picks will be winners, our research shows that these picks historically outperformed the market when we factor in known risk factors.

Is CenturyLink, Inc. (NYSE:CTL) a buy right now? The smart money is becoming more confident. The number of long hedge fund bets inched up by 1 lately. Our calculations also showed that CTL isn’t among the 30 most popular stocks among hedge funds (click for Q3 rankings and see the video below for Q2 rankings). There are currently 3 ETFs with nearly 5% allocation to CTL though: Invesco S&P 500 Equal Weight Communication Services ETF (NYSE:EWCO), iShares U.S. Telecommunications ETF (BATS:IYZ), and Deep Value ETF (NYSE:DVP).

Unlike the largest US hedge funds that are convinced Dow will soar past 40,000 or the world’s most bearish hedge fund that’s more convinced than ever that a crash is coming, our long-short investment strategy doesn’t rely on bull or bear markets to deliver double digit returns. We only rely on the best performing hedge funds‘ buy/sell signals. We’re going to analyze the recent hedge fund action encompassing CenturyLink, Inc. (NYSE:CTL). 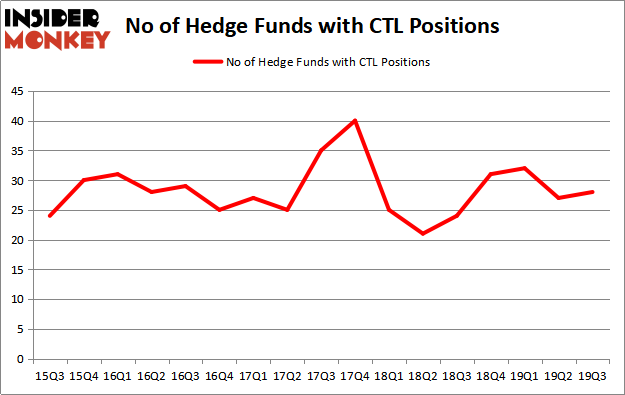 As one would reasonably expect, some big names were leading the bulls’ herd. Renaissance Technologies created the largest position in CenturyLink, Inc. (NYSE:CTL). Renaissance Technologies had $12.2 million invested in the company at the end of the quarter. Michael Gelband’s ExodusPoint Capital also initiated a $3.2 million position during the quarter. The other funds with brand new CTL positions are Fred Knoll’s Knoll Capital Management, Paul Tudor Jones’s Tudor Investment Corp, and Renee Yao’s Neo Ivy Capital.

As you can see these stocks had an average of 30.75 hedge funds with bullish positions and the average amount invested in these stocks was $877 million. That figure was $1098 million in CTL’s case. NVR, Inc. (NYSE:NVR) is the most popular stock in this table. On the other hand Old Dominion Freight Line (NASDAQ:ODFL) is the least popular one with only 22 bullish hedge fund positions. CenturyLink, Inc. (NYSE:CTL) is not the least popular stock in this group but hedge fund interest is still below average. Our calculations showed that top 20 most popular stocks among hedge funds returned 37.4% in 2019 through the end of November and outperformed the S&P 500 ETF (SPY) by 9.9 percentage points. A small number of hedge funds were also right about betting on CTL as the stock returned 18.1% during the first two months of Q4 and outperformed the market by an even larger margin.