Is The Procter & Gamble Company (NYSE:PG) a good investment right now? We check hedge fund and billionaire investor sentiment before delving into hours of research. Hedge funds spend millions of dollars on Ivy League graduates, unconventional data sources, expert networks, and get tips from investment bankers and industry insiders. Sure they sometimes fail miserably, but their consensus stock picks historically outperformed the market after adjusting for known risk factors.

Is The Procter & Gamble Company (NYSE:PG) a bargain? Investors who are in the know are taking a bullish view. The number of bullish hedge fund positions improved by 8 in recent months. Our calculations also showed that PG isn’t among the 30 most popular stocks among hedge funds. PG was in 66 hedge funds’ portfolios at the end of September. There were 58 hedge funds in our database with PG holdings at the end of the previous quarter.

Unlike the largest US hedge funds that are convinced Dow will soar past 40,000 or the world’s most bearish hedge fund that’s more convinced than ever that a crash is coming, our long-short investment strategy doesn’t rely on bull or bear markets to deliver double digit returns. We only rely on the best performing hedge funds‘ buy/sell signals. We’re going to check out the fresh hedge fund action regarding The Procter & Gamble Company (NYSE:PG).

How have hedgies been trading The Procter & Gamble Company (NYSE:PG)?

At the end of the third quarter, a total of 66 of the hedge funds tracked by Insider Monkey held long positions in this stock, a change of 14% from the second quarter of 2019. By comparison, 53 hedge funds held shares or bullish call options in PG a year ago. With the smart money’s capital changing hands, there exists a few notable hedge fund managers who were boosting their holdings considerably (or already accumulated large positions). 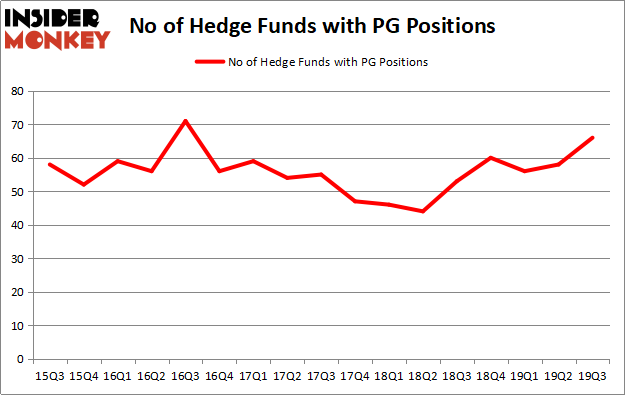 More specifically, Trian Partners was the largest shareholder of The Procter & Gamble Company (NYSE:PG), with a stake worth $4556.1 million reported as of the end of September. Trailing Trian Partners was Cedar Rock Capital, which amassed a stake valued at $1502.2 million. AQR Capital Management, Yacktman Asset Management, and Fisher Asset Management were also very fond of the stock, becoming one of the largest hedge fund holders of the company. In terms of the portfolio weights assigned to each position Trian Partners allocated the biggest weight to The Procter & Gamble Company (NYSE:PG), around 47.56% of its portfolio. Cedar Rock Capital is also relatively very bullish on the stock, designating 34.81 percent of its 13F equity portfolio to PG.

As one would reasonably expect, some big names were leading the bulls’ herd. Thames Capital Management, managed by Jay Genzer, assembled the biggest position in The Procter & Gamble Company (NYSE:PG). Thames Capital Management had $7.5 million invested in the company at the end of the quarter. Benjamin A. Smith’s Laurion Capital Management also made a $3.8 million investment in the stock during the quarter. The other funds with brand new PG positions are Donald Sussman’s Paloma Partners, Brad Dunkley and Blair Levinsky’s Waratah Capital Advisors, and Anand Parekh’s Alyeska Investment Group.

As you can see these stocks had an average of 75.75 hedge funds with bullish positions and the average amount invested in these stocks was $12034 million. That figure was $11537 million in PG’s case. Mastercard Incorporated (NYSE:MA) is the most popular stock in this table. On the other hand AT&T Inc. (NYSE:T) is the least popular one with only 46 bullish hedge fund positions. The Procter & Gamble Company (NYSE:PG) is not the least popular stock in this group but hedge fund interest is still below average. This is a slightly negative signal and we’d rather spend our time researching stocks that hedge funds are piling on. Our calculations showed that top 20 most popular stocks among hedge funds returned 34.7% in 2019 through November 22nd and outperformed the S&P 500 ETF (SPY) by 8.5 percentage points. Unfortunately PG wasn’t nearly as popular as these 20 stocks (hedge fund sentiment was quite bearish); PG investors were disappointed as the stock returned -2.7% during the fourth quarter (through 11/22) and underperformed the market. If you are interested in investing in large cap stocks with huge upside potential, you should check out the top 20 most popular stocks among hedge funds as 70 percent of these stocks already outperformed the market in Q4.