Like everyone else, elite investors make mistakes. Some of their top consensus picks, such as Amazon, Facebook and Alibaba, have not done well in Q4 due to various reasons. Nevertheless, the data show elite investors’ consensus picks have done well on average over the long-term. The top 15 S&P 500 stocks among hedge funds at the end of September 2018 returned an average of 1% through March 15th whereas the S&P 500 Index ETF lost 2.2% during the same period. Because their consensus picks have done well, we pay attention to what elite funds think before doing extensive research on a stock. In this article, we take a closer look at Intercontinental Exchange Inc (NYSE:ICE) from the perspective of those elite funds.

Intercontinental Exchange Inc (NYSE:ICE) investors should be aware of an increase in activity from the world’s largest hedge funds lately. Our calculations also showed that ICE isn’t among the 30 most popular stocks among hedge funds. 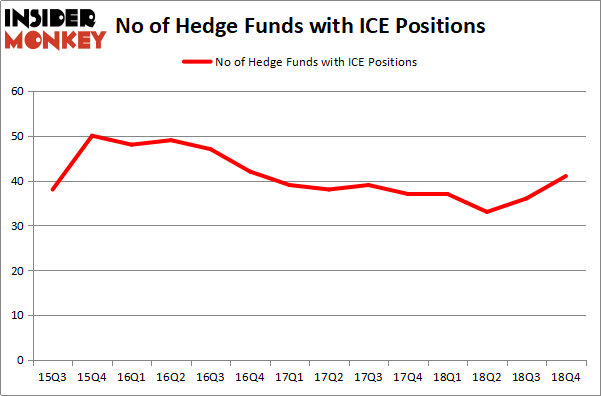 As one would reasonably expect, key hedge funds have been driving this bullishness. Junto Capital Management, managed by James Parsons, established the most outsized position in Intercontinental Exchange Inc (NYSE:ICE). Junto Capital Management had $76.2 million invested in the company at the end of the quarter. Jim Simons’s Renaissance Technologies also made a $46.6 million investment in the stock during the quarter. The following funds were also among the new ICE investors: Brandon Haley’s Holocene Advisors, Doug Gordon, Jon Hilsabeck and Don Jabro’s Shellback Capital, and Eli Cohen’s Crescent Park Management.

As you can see these stocks had an average of 41.5 hedge funds with bullish positions and the average amount invested in these stocks was $2026 million. That figure was $2693 million in ICE’s case. HCA Healthcare Inc (NYSE:HCA) is the most popular stock in this table. On the other hand Ecolab Inc. (NYSE:ECL) is the least popular one with only 27 bullish hedge fund positions. Intercontinental Exchange Inc (NYSE:ICE) is not the least popular stock in this group but hedge fund interest is still below average. This is a slightly negative signal and we’d rather spend our time researching stocks that hedge funds are piling on. Our calculations showed that top 15 most popular stocks among hedge funds returned 19.7% through March 15th and outperformed the S&P 500 ETF (SPY) by 6.6 percentage points. Unfortunately ICE wasn’t in this group. Hedge funds that bet on ICE were disappointed as the stock lost 0.6% and underperformed the market by a large margin. If you are interested in investing in large cap stocks, you should check out the top 15 hedge fund stocks as 13 of these outperformed the market.

Hedge Funds Have Never Been This Bullish On Thermo Fisher Scientific Inc. (...
Monthly Newsletter Strategy
Download a free copy of our newsletter and see the details inside!
Hedge Fund Resource Center
Related News
Is Intercontinental Exchange Inc (ICE) A Good Stock To Buy? 11 Fastest Growing S&P 500 Companies in America GE, PepsiCo, PPG Industries, and More: Here’s Why These Five Stocks Are Trending Is Intercontinental Exchange Inc (ICE) a Good Stock to Buy? Why You Should Get Hyped About Churchill Downs, Inc. (CHDN), Cypress Semiconductor Corporation (CY), & Two More Stocks We All Know Sprott Loves Materials Stocks; Now See What Else It Likes Billionaire Andreas Halvorsen’s Largest New Positions Include Intercontinental Exchange, Microsoft Corporation & More Ten of the Most Common Addictions 13 African Countries with the Largest White Population in 2018 6 Causes of Human Trafficking in Africa, India, and US
Billionaire Hedge Funds