The latest 13F reporting period has come and gone, and Insider Monkey is again at the forefront when it comes to making use of this gold mine of data. We have processed the filings of the more than 700 world-class investment firms that we track and now have access to the collective wisdom contained in these filings, which are based on their June 28 holdings, data that is available nowhere else. Should you consider The Cooper Companies, Inc. (NYSE:COO) for your portfolio? We’ll look to this invaluable collective wisdom for the answer.

The Cooper Companies, Inc. (NYSE:COO) shares haven’t seen a lot of action during the second quarter. Overall, hedge fund sentiment was unchanged. The stock was in 28 hedge funds’ portfolios at the end of June. At the end of this article we will also compare COO to other stocks including D.R. Horton, Inc. (NYSE:DHI), CDW Corporation (NASDAQ:CDW), and Equifax Inc. (NYSE:EFX) to get a better sense of its popularity. Our calculations also showed that CDW isn’t among the 30 most popular stocks among hedge funds (view the video below). 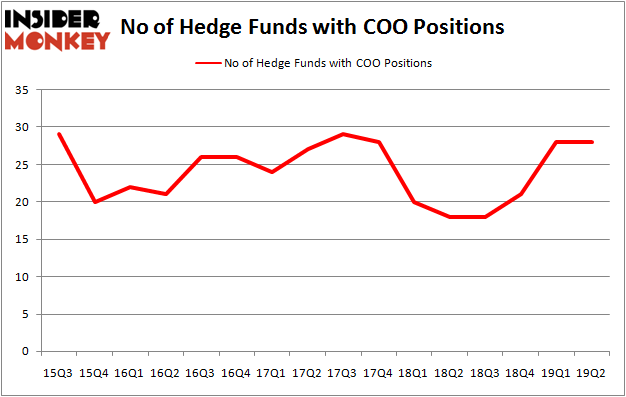 Unlike some fund managers who are betting on Dow reaching 40000 in a year, our long-short investment strategy doesn’t rely on bull markets to deliver double digit returns. We only rely on hedge fund buy/sell signals. We’re going to review the latest hedge fund action regarding The Cooper Companies, Inc. (NYSE:COO).

How are hedge funds trading The Cooper Companies, Inc. (NYSE:COO)?

At the end of the second quarter, a total of 28 of the hedge funds tracked by Insider Monkey were bullish on this stock, a change of 0% from the first quarter of 2019. The graph below displays the number of hedge funds with bullish position in COO over the last 16 quarters. With hedgies’ positions undergoing their usual ebb and flow, there exists a select group of notable hedge fund managers who were increasing their holdings considerably (or already accumulated large positions).

Of the funds tracked by Insider Monkey, David Blood and Al Gore’s Generation Investment Management has the largest position in The Cooper Companies, Inc. (NYSE:COO), worth close to $634.4 million, comprising 4.4% of its total 13F portfolio. On Generation Investment Management’s heels is Cliff Asness of AQR Capital Management, with a $92.2 million position; 0.1% of its 13F portfolio is allocated to the company. Remaining hedge funds and institutional investors with similar optimism include Ken Griffin’s Citadel Investment Group, Paul Marshall and Ian Wace’s Marshall Wace LLP and Gabriel Plotkin’s Melvin Capital Management.

Since The Cooper Companies, Inc. (NYSE:COO) has faced a decline in interest from hedge fund managers, logic holds that there exists a select few hedgies that decided to sell off their entire stakes by the end of the second quarter. It’s worth mentioning that Ian Simm’s Impax Asset Management sold off the biggest stake of the “upper crust” of funds watched by Insider Monkey, valued at close to $2.4 million in stock, and Joel Greenblatt’s Gotham Asset Management was right behind this move, as the fund cut about $1.5 million worth. These moves are interesting, as total hedge fund interest stayed the same (this is a bearish signal in our experience).

As you can see these stocks had an average of 33 hedge funds with bullish positions and the average amount invested in these stocks was $1604 million. That figure was $983 million in COO’s case. D.R. Horton, Inc. (NYSE:DHI) is the most popular stock in this table. On the other hand First Republic Bank (NYSE:FRC) is the least popular one with only 22 bullish hedge fund positions. The Cooper Companies, Inc. (NYSE:COO) is not the least popular stock in this group but hedge fund interest is still below average. This is a slightly negative signal and we’d rather spend our time researching stocks that hedge funds are piling on. Our calculations showed that top 20 most popular stocks among hedge funds returned 24.4% in 2019 through September 30th and outperformed the S&P 500 ETF (SPY) by 4 percentage points. Unfortunately COO wasn’t nearly as popular as these 20 stocks (hedge fund sentiment was quite bearish); COO investors were disappointed as the stock returned -11.8% during the third quarter and underperformed the market. If you are interested in investing in large cap stocks with huge upside potential, you should check out the top 20 most popular stocks among hedge funds as many of these stocks already outperformed the market so far in 2019.