Hedge fund interest in The Cooper Companies, Inc. (NYSE:COO) shares was flat at the end of last quarter. This is usually a negative indicator. The level and the change in hedge fund popularity aren’t the only variables you need to analyze to decipher hedge funds’ perspectives. A stock may witness a boost in popularity but it may still be less popular than similarly priced stocks. That’s why at the end of this article we will examine companies such as E*TRADE Financial Corporation (NASDAQ:ETFC), Arthur J. Gallagher & Co. (NYSE:AJG), and TransUnion (NYSE:TRU) to gather more data points.

We’re going to take a glance at the fresh hedge fund action regarding The Cooper Companies, Inc. (NYSE:COO).

How have hedgies been trading The Cooper Companies, Inc. (NYSE:COO)? 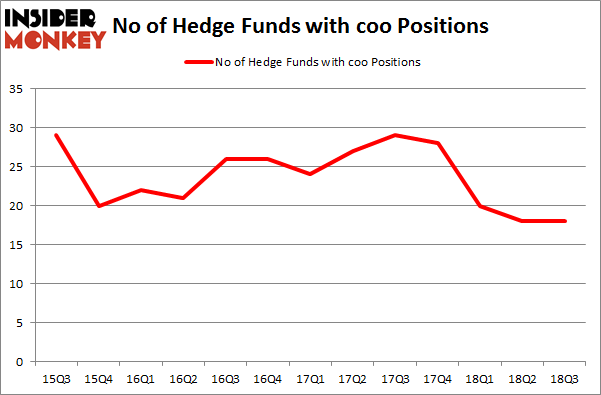 Among these funds, Generation Investment Management held the most valuable stake in The Cooper Companies, Inc. (NYSE:COO), which was worth $911.9 million at the end of the third quarter. On the second spot was AQR Capital Management which amassed $51.5 million worth of shares. Moreover, Citadel Investment Group, Fisher Asset Management, and Alyeska Investment Group were also bullish on The Cooper Companies, Inc. (NYSE:COO), allocating a large percentage of their portfolios to this stock.

Since The Cooper Companies, Inc. (NYSE:COO) has experienced falling interest from the entirety of the hedge funds we track, it’s safe to say that there is a sect of hedge funds that elected to cut their positions entirely by the end of the third quarter. It’s worth mentioning that D. E. Shaw’s D E Shaw sold off the biggest investment of the 700 funds followed by Insider Monkey, valued at about $2.4 million in stock. Vishal Saluja and Pham Quang’s fund, Endurant Capital Management, also sold off its stock, about $2.2 million worth. These bearish behaviors are important to note, as aggregate hedge fund interest stayed the same (this is a bearish signal in our experience).

As you can see these stocks had an average of 29.75 hedge funds with bullish positions and the average amount invested in these stocks was $1.02 billion. That figure was $1.13 billion in COO’s case. E*TRADE Financial Corporation (NASDAQ:ETFC) is the most popular stock in this table. On the other hand Arthur J. Gallagher & Co. (NYSE:AJG) is the least popular one with only 26 bullish hedge fund positions. Compared to these stocks The Cooper Companies, Inc. (NYSE:COO) is even less popular than AJG. Considering that hedge funds aren’t fond of this stock in relation to other companies analyzed in this article, it may be a good idea to analyze it in detail and understand why the smart money isn’t behind this stock. This isn’t necessarily bad news. Although it is possible that hedge funds may think the stock is overpriced and view the stock as a short candidate, they may not be very familiar with the bullish thesis. In either case more research is warranted.