Most investors tend to think that hedge funds and other asset managers are worthless, as they cannot beat even simple index fund portfolios. In fact, most people expect hedge funds to compete with and outperform the bull market that we have witnessed in recent years. However, hedge funds are generally partially hedged and aim at delivering attractive risk-adjusted returns rather than following the ups and downs of equity markets hoping that they will outperform the broader market. Our research shows that certain hedge funds do have great stock picking skills (and we can identify these hedge funds in advance pretty accurately), so let’s take a glance at the smart money sentiment towards NRG Energy Inc (NYSE:NRG).

NRG Energy Inc (NYSE:NRG) was in 46 hedge funds’ portfolios at the end of the third quarter of 2019. NRG shareholders have witnessed an increase in activity from the world’s largest hedge funds of late. There were 42 hedge funds in our database with NRG positions at the end of the previous quarter. Our calculations also showed that NRG isn’t among the 30 most popular stocks among hedge funds.

Unlike the largest US hedge funds that are convinced Dow will soar past 40,000 or the world’s most bearish hedge fund that’s more convinced than ever that a crash is coming, our long-short investment strategy doesn’t rely on bull or bear markets to deliver double digit returns. We only rely on the best performing hedge funds‘ buy/sell signals. We’re going to analyze the fresh hedge fund action surrounding NRG Energy Inc (NYSE:NRG).

How have hedgies been trading NRG Energy Inc (NYSE:NRG)? 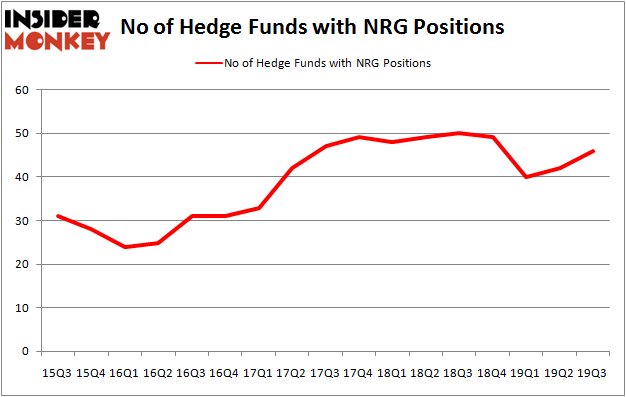 When looking at the institutional investors followed by Insider Monkey, Steadfast Capital Management, managed by Robert Pitts, holds the largest position in NRG Energy Inc (NYSE:NRG). Steadfast Capital Management has a $241.4 million position in the stock, comprising 3.3% of its 13F portfolio. The second most bullish fund manager is Mitch Kuflik and Rob Sobel of Brahman Capital, with a $179.1 million position; the fund has 17.1% of its 13F portfolio invested in the stock. Remaining professional money managers that are bullish encompass Noam Gottesman’s GLG Partners, Ken Griffin’s Citadel Investment Group and Israel Englander’s Millennium Management. In terms of the portfolio weights assigned to each position SAYA Management allocated the biggest weight to NRG Energy Inc (NYSE:NRG), around 18.56% of its portfolio. Brahman Capital is also relatively very bullish on the stock, setting aside 17.13 percent of its 13F equity portfolio to NRG.

As one would reasonably expect, key money managers have been driving this bullishness. Electron Capital Partners, managed by Jos Shaver, created the most outsized position in NRG Energy Inc (NYSE:NRG). Electron Capital Partners had $38.4 million invested in the company at the end of the quarter. Brian Ashford-Russell and Tim Woolley’s Polar Capital also initiated a $4.5 million position during the quarter. The other funds with brand new NRG positions are Jim O’Brien and Jonathan Dorfman’s Napier Park Global Capital, John Brandmeyer’s Cognios Capital, and Renee Yao’s Neo Ivy Capital.

As you can see these stocks had an average of 32.25 hedge funds with bullish positions and the average amount invested in these stocks was $779 million. That figure was $1482 million in NRG’s case. Carvana Co. (NYSE:CVNA) is the most popular stock in this table. On the other hand EPAM Systems Inc (NYSE:EPAM) is the least popular one with only 24 bullish hedge fund positions. NRG Energy Inc (NYSE:NRG) is not the most popular stock in this group but hedge fund interest is still above average. This is a slightly positive signal but we’d rather spend our time researching stocks that hedge funds are piling on. Our calculations showed that top 20 most popular stocks among hedge funds returned 34.7% in 2019 through November 22nd and outperformed the S&P 500 ETF (SPY) by 8.5 percentage points. Unfortunately NRG wasn’t nearly as popular as these 20 stocks and hedge funds that were betting on NRG were disappointed as the stock returned -0.5% during the fourth quarter (through 11/22) and underperformed the market. If you are interested in investing in large cap stocks with huge upside potential, you should check out the top 20 most popular stocks among hedge funds as many of these stocks already outperformed the market so far this year.