II-VI, Inc. (NASDAQ:IIVI) has experienced a decrease in hedge fund sentiment in recent months. IIVI was in 21 hedge funds’ portfolios at the end of the second quarter of 2019. There were 22 hedge funds in our database with IIVI positions at the end of the previous quarter. Our calculations also showed that IIVI isn’t among the 30 most popular stocks among hedge funds (see the video below). 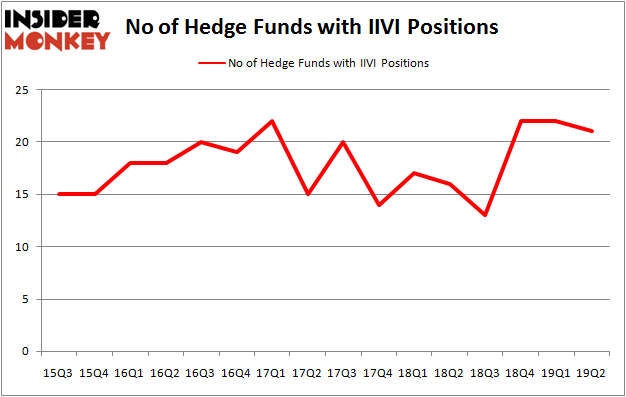 What have hedge funds been doing with II-VI, Inc. (NASDAQ:IIVI)?

According to publicly available hedge fund and institutional investor holdings data compiled by Insider Monkey, Ken Griffin’s Citadel Investment Group has the most valuable position in II-VI, Inc. (NASDAQ:IIVI), worth close to $19 million, amounting to less than 0.1%% of its total 13F portfolio. Sitting at the No. 2 spot is Millennium Management, managed by Israel Englander, which holds a $13.4 million position; the fund has less than 0.1%% of its 13F portfolio invested in the stock. Some other professional money managers that are bullish comprise Chuck Royce’s Royce & Associates, D. E. Shaw’s D E Shaw and John Hurley’s Cavalry Asset Management.

Seeing as II-VI, Inc. (NASDAQ:IIVI) has faced falling interest from hedge fund managers, logic holds that there lies a certain “tier” of fund managers that elected to cut their entire stakes in the second quarter. Interestingly, Mariko Gordon’s Daruma Asset Management dropped the biggest position of the 750 funds followed by Insider Monkey, totaling close to $31.1 million in stock. Joe DiMenna’s fund, ZWEIG DIMENNA PARTNERS, also cut its stock, about $6.6 million worth. These bearish behaviors are intriguing to say the least, as aggregate hedge fund interest dropped by 1 funds in the second quarter.

As you can see these stocks had an average of 16 hedge funds with bullish positions and the average amount invested in these stocks was $254 million. That figure was $110 million in IIVI’s case. Qudian Inc. (NYSE:QD) is the most popular stock in this table. On the other hand Pattern Energy Group Inc (NASDAQ:PEGI) is the least popular one with only 12 bullish hedge fund positions. II-VI, Inc. (NASDAQ:IIVI) is not the most popular stock in this group but hedge fund interest is still above average. This is a slightly positive signal but we’d rather spend our time researching stocks that hedge funds are piling on. Our calculations showed that top 20 most popular stocks among hedge funds returned 24.4% in 2019 through September 30th and outperformed the S&P 500 ETF (SPY) by 4 percentage points. Unfortunately IIVI wasn’t nearly as popular as these 20 stocks and hedge funds that were betting on IIVI were disappointed as the stock returned -3.7% during the third quarter and underperformed the market. If you are interested in investing in large cap stocks with huge upside potential, you should check out the top 20 most popular stocks among hedge funds as many of these stocks already outperformed the market so far this year.