Although the masses and most of the financial media blame hedge funds for their exorbitant fee structure and disappointing performance, these investors have proved to have great stock picking abilities over the years (that’s why their assets under management continue to swell). We believe hedge fund sentiment should serve as a crucial tool of an individual investor’s stock selection process, as it may offer great insights of how the brightest minds of the finance industry feel about specific stocks. After all, these people have access to smartest analysts and expensive data/information sources that individual investors can’t match. So should one consider investing in CURO Group Holdings Corp. (NYSE:CURO)? The smart money sentiment can provide an answer to this question.

CURO Group Holdings Corp. (NYSE:CURO) was in 10 hedge funds’ portfolios at the end of December. CURO investors should pay attention to a decrease in enthusiasm from smart money in recent months. There were 16 hedge funds in our database with CURO positions at the end of the previous quarter. Our calculations also showed that CURO isn’t among the 30 most popular stocks among hedge funds. 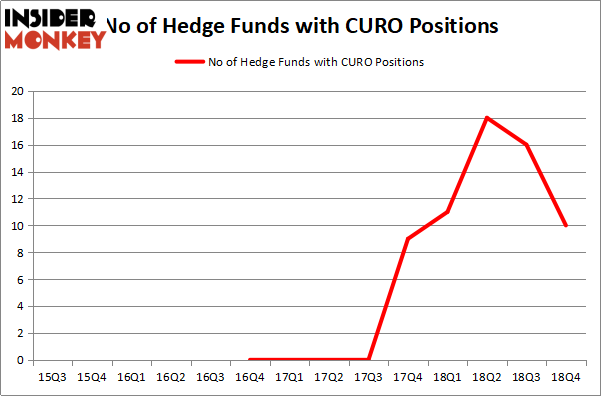 According to publicly available hedge fund and institutional investor holdings data compiled by Insider Monkey, Nantahala Capital Management, managed by Wilmot B. Harkey and Daniel Mack, holds the most valuable position in CURO Group Holdings Corp. (NYSE:CURO). Nantahala Capital Management has a $28.1 million position in the stock, comprising 0.9% of its 13F portfolio. The second most bullish fund manager is Empyrean Capital Partners, led by Michael A. Price and Amos Meron, holding a $18.9 million position; the fund has 1% of its 13F portfolio invested in the stock. Other members of the smart money that hold long positions include Phil Frohlich’s Prescott Group Capital Management, Tom Brown’s Second Curve Capital and Matthew Barrett’s Glendon Capital Management.

Because CURO Group Holdings Corp. (NYSE:CURO) has witnessed declining sentiment from the entirety of the hedge funds we track, we can see that there is a sect of funds who sold off their positions entirely by the end of the third quarter. Intriguingly, Principal Global Investors’s Columbus Circle Investors dumped the biggest stake of the “upper crust” of funds followed by Insider Monkey, worth close to $11.3 million in stock. Daniel Johnson’s fund, Gillson Capital, also cut its stock, about $6.9 million worth. These moves are intriguing to say the least, as total hedge fund interest was cut by 6 funds by the end of the third quarter.

As you can see these stocks had an average of 7.75 hedge funds with bullish positions and the average amount invested in these stocks was $151 million. That figure was $76 million in CURO’s case. Sentinel Energy Services Inc. (NASDAQ:STNL) is the most popular stock in this table. On the other hand Green Plains Partners LP (NASDAQ:GPP) is the least popular one with only 2 bullish hedge fund positions. CURO Group Holdings Corp. (NYSE:CURO) is not the most popular stock in this group but hedge fund interest is still above average. Our calculations showed that top 15 most popular stocks) among hedge funds returned 24.2% through April 22nd and outperformed the S&P 500 ETF (SPY) by more than 7 percentage points. Hedge funds were also right about betting on CURO, though not to the same extent, as the stock returned 19.7% and outperformed the market as well.