Is BlackRock, Inc. (NYSE:BLK) a good place to invest some of your money right now? We can gain invaluable insight to help us answer that question by studying the investment trends of top investors, who employ world-class Ivy League graduates, who are given immense resources and industry contacts to put their financial expertise to work. The top picks of these firms have historically outperformed the market when we account for known risk factors, making them very valuable investment ideas.

Is BlackRock, Inc. (NYSE:BLK) undervalued? Money managers are in a bearish mood. The number of bullish hedge fund positions retreated by 1 recently. Our calculations also showed that BLK isn’t among the 30 most popular stocks among hedge funds.

Unlike the largest US hedge funds that are convinced Dow will soar past 40,000 or the world’s most bearish hedge fund that’s more convinced than ever that a crash is coming, our long-short investment strategy doesn’t rely on bull or bear markets to deliver double digit returns. We only rely on the best performing hedge funds‘ buy/sell signals. We’re going to go over the key hedge fund action regarding BlackRock, Inc. (NYSE:BLK).

Heading into the fourth quarter of 2019, a total of 42 of the hedge funds tracked by Insider Monkey held long positions in this stock, a change of -2% from one quarter earlier. Below, you can check out the change in hedge fund sentiment towards BLK over the last 17 quarters. With hedgies’ positions undergoing their usual ebb and flow, there exists a select group of key hedge fund managers who were boosting their holdings substantially (or already accumulated large positions). 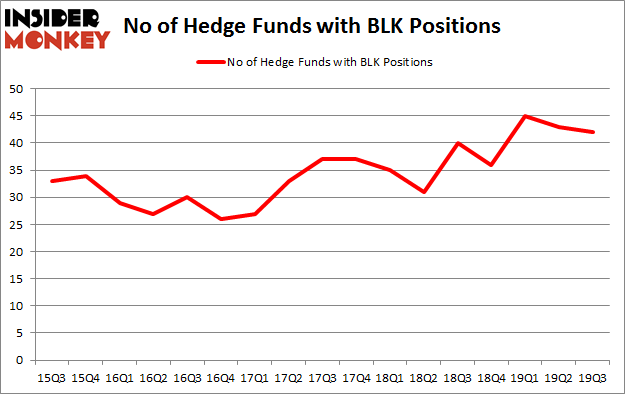 Since BlackRock, Inc. (NYSE:BLK) has faced bearish sentiment from hedge fund managers, logic holds that there lies a certain “tier” of hedge funds who sold off their full holdings last quarter. Interestingly, Daniel Johnson’s Gillson Capital dropped the biggest stake of the “upper crust” of funds tracked by Insider Monkey, worth close to $23.2 million in stock. Andrew Sandler’s fund, Sandler Capital Management, also said goodbye to its stock, about $12.2 million worth. These moves are important to note, as total hedge fund interest dropped by 1 funds last quarter.

Let’s now take a look at hedge fund activity in other stocks similar to BlackRock, Inc. (NYSE:BLK). We will take a look at Intuit Inc. (NASDAQ:INTU), Westpac Banking Corporation (NYSE:WBK), Becton, Dickinson and Company (NYSE:BDX), and The TJX Companies, Inc. (NYSE:TJX). This group of stocks’ market valuations are closest to BLK’s market valuation.

As you can see these stocks had an average of 35.75 hedge funds with bullish positions and the average amount invested in these stocks was $1295 million. That figure was $1041 million in BLK’s case. The TJX Companies, Inc. (NYSE:TJX) is the most popular stock in this table. On the other hand Westpac Banking Corporation (NYSE:WBK) is the least popular one with only 4 bullish hedge fund positions. BlackRock, Inc. (NYSE:BLK) is not the most popular stock in this group but hedge fund interest is still above average. Our calculations showed that top 20 most popular stocks among hedge funds returned 34.7% in 2019 through November 22nd and outperformed the S&P 500 ETF (SPY) by 8.5 percentage points. Hedge funds were also right about betting on BLK as the stock returned 8.8% during the fourth quarter (through 11/22) and outperformed the market. Hedge funds were rewarded for their relative bullishness.