Here is What Hedge Funds Think About eBay Inc (EBAY)

Is eBay Inc (NASDAQ:EBAY) the right investment to pursue these days? Prominent investors are taking a bearish view. The number of long hedge fund bets were trimmed by 2 lately. Our calculations also showed that EBAY isn’t among the 30 most popular stocks among hedge funds.

If you’d ask most traders, hedge funds are viewed as underperforming, old investment vehicles of the past. While there are greater than 8000 funds in operation today, We hone in on the moguls of this group, around 750 funds. Most estimates calculate that this group of people oversee most of all hedge funds’ total asset base, and by keeping an eye on their first-class equity investments, Insider Monkey has found a few investment strategies that have historically surpassed Mr. Market. Insider Monkey’s flagship hedge fund strategy outrun the S&P 500 index by nearly 5 percentage points per year since its inception in May 2014 through early November 2018. We were able to generate large returns even by identifying short candidates. Our portfolio of short stocks lost 27.5% since February 2017 (through March 12th) even though the market was up nearly 25% during the same period. We just shared a list of 6 short targets in our latest quarterly update and they are already down an average of 6% in less than a month. 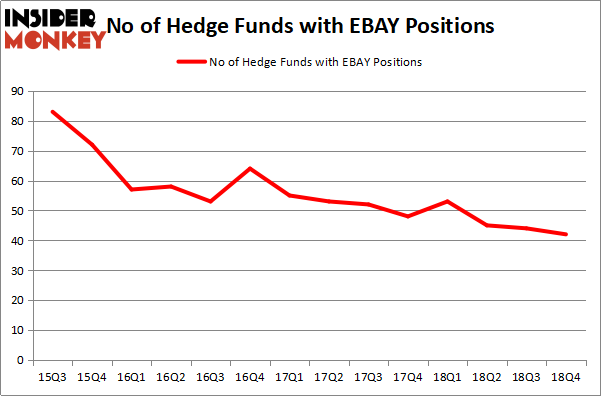 Due to the fact that eBay Inc (NASDAQ:EBAY) has experienced declining sentiment from the aggregate hedge fund industry, we can see that there exists a select few fund managers that slashed their entire stakes last quarter. It’s worth mentioning that David Cohen and Harold Levy’s Iridian Asset Management dumped the largest position of all the hedgies tracked by Insider Monkey, comprising close to $125.9 million in stock, and David Costen Haley’s HBK Investments was right behind this move, as the fund sold off about $30.6 million worth. These transactions are interesting, as total hedge fund interest was cut by 2 funds last quarter.

As you can see these stocks had an average of 27.75 hedge funds with bullish positions and the average amount invested in these stocks was $1966 million. That figure was $2225 million in EBAY’s case. Williams Companies, Inc. (NYSE:WMB) is the most popular stock in this table. On the other hand Takeda Pharmaceutical Company Limited (NYSE:TAK) is the least popular one with only 10 bullish hedge fund positions. Compared to these stocks eBay Inc (NASDAQ:EBAY) is more popular among hedge funds. Considering that hedge funds are fond of this stock in relation to its market cap peers, it may be a good idea to analyze it in detail and potentially include it in your portfolio. Our calculations showed that top 15 most popular stocks among hedge funds returned 19.7% through March 15th and outperformed the S&P 500 ETF (SPY) by 6.6 percentage points. A handful of hedge funds were also right about betting on eBay as the stock returned 29.9% and outperformed the market as well.