We know that hedge funds generate strong, risk-adjusted returns over the long run, which is why imitating the picks that they are collectively bullish on can be a profitable strategy for retail investors. With billions of dollars in assets, professional investors have to conduct complex analyses, spend many resources and use tools that are not always available for the general crowd. This doesn’t mean that they don’t have occasional colossal losses; they do. However, it is still a good idea to keep an eye on hedge fund activity. With this in mind, let’s examine the smart money sentiment towards NMI Holdings Inc (NASDAQ:NMIH) and determine whether hedge funds skillfully traded this stock.

NMI Holdings Inc (NASDAQ:NMIH) investors should be aware of an increase in support from the world’s most elite money managers lately. Our calculations also showed that NMIH isn’t among the 30 most popular stocks among hedge funds (click for Q1 rankings and see the video for a quick look at the top 5 stocks).

According to most stock holders, hedge funds are assumed to be underperforming, outdated investment vehicles of years past. While there are over 8000 funds with their doors open at the moment, Our experts choose to focus on the elite of this club, about 850 funds. These investment experts shepherd the lion’s share of the hedge fund industry’s total asset base, and by paying attention to their inimitable stock picks, Insider Monkey has deciphered numerous investment strategies that have historically beaten the S&P 500 index. Insider Monkey’s flagship short hedge fund strategy outrun the S&P 500 short ETFs by around 20 percentage points per annum since its inception in March 2017. Our portfolio of short stocks lost 36% since February 2017 (through May 18th) even though the market was up 30% during the same period. We just shared a list of 8 short targets in our latest quarterly update .

At Insider Monkey we scour multiple sources to uncover the next great investment idea. For example, on one site we found out that NBA champion Isiah Thomas is now the CEO of this cannabis company. The same site also talks about a snack manufacturer that’s growing at 30% annually. Even though we recommend positions in only a tiny fraction of the companies we analyze, we check out as many stocks as we can. We read hedge fund investor letters and listen to stock pitches at hedge fund conferences. Hedge fund sentiment towards Tesla reached its all time high at the end of 2019 and Tesla shares more than tripled this year. We are trying to identify other EV revolution winners, so if you have any good ideas send us an email. Keeping this in mind let’s go over the recent hedge fund action regarding NMI Holdings Inc (NASDAQ:NMIH).

At Q1’s end, a total of 23 of the hedge funds tracked by Insider Monkey were bullish on this stock, a change of 10% from the previous quarter. Below, you can check out the change in hedge fund sentiment towards NMIH over the last 18 quarters. With hedge funds’ sentiment swirling, there exists a select group of key hedge fund managers who were upping their stakes considerably (or already accumulated large positions). 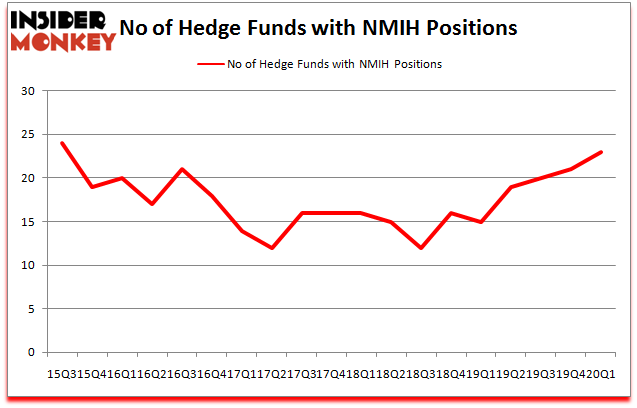 Among these funds, Oaktree Capital Management held the most valuable stake in NMI Holdings Inc (NASDAQ:NMIH), which was worth $51.1 million at the end of the third quarter. On the second spot was Renaissance Technologies which amassed $15.2 million worth of shares. Royce & Associates, Berylson Capital Partners, and AQR Capital Management were also very fond of the stock, becoming one of the largest hedge fund holders of the company. In terms of the portfolio weights assigned to each position Berylson Capital Partners allocated the biggest weight to NMI Holdings Inc (NASDAQ:NMIH), around 10.06% of its 13F portfolio. Oaktree Capital Management is also relatively very bullish on the stock, earmarking 1.44 percent of its 13F equity portfolio to NMIH.

With a general bullishness amongst the heavyweights, specific money managers were leading the bulls’ herd. Berylson Capital Partners, managed by James Thomas Berylson, initiated the most outsized position in NMI Holdings Inc (NASDAQ:NMIH). Berylson Capital Partners had $3.7 million invested in the company at the end of the quarter. Greg Eisner’s Engineers Gate Manager also made a $1 million investment in the stock during the quarter. The following funds were also among the new NMIH investors: Mike Vranos’s Ellington, Steve Cohen’s Point72 Asset Management, and Hoon Kim’s Quantinno Capital.

As you can see these stocks had an average of 15.5 hedge funds with bullish positions and the average amount invested in these stocks was $91 million. That figure was $91 million in NMIH’s case. Jack in the Box Inc. (NASDAQ:JACK) is the most popular stock in this table. On the other hand Astec Industries, Inc. (NASDAQ:ASTE) is the least popular one with only 10 bullish hedge fund positions. NMI Holdings Inc (NASDAQ:NMIH) is not the most popular stock in this group but hedge fund interest is still above average. Our calculations showed that top 10 most popular stocks among hedge funds returned 41.4% in 2019 and outperformed the S&P 500 ETF (SPY) by 10.1 percentage points. These stocks gained 12.3% in 2020 through June 30th but still beat the market by 15.5 percentage points. Hedge funds were also right about betting on NMIH as the stock returned 38.5% in Q2 and outperformed the market. Hedge funds were rewarded for their relative bullishness.