It is already common knowledge that individual investors do not usually have the necessary resources and abilities to properly research an investment opportunity. As a result, most investors pick their illusory “winners” by making a superficial analysis and research that leads to poor performance on aggregate. Since stock returns aren’t usually symmetrically distributed and index returns are more affected by a few outlier stocks (i.e. the FAANG stocks dominating and driving S&P 500 Index’s returns in recent years), more than 50% of the constituents of the Standard and Poor’s 500 Index underperform the benchmark. Hence, if you randomly pick a stock, there is more than 50% chance that you’d fail to beat the market. At the same time, the 20 most favored S&P 500 stocks by the hedge funds monitored by Insider Monkey generated an outperformance of 6 percentage points during the first 5 months of 2019. Of course, hedge funds do make wrong bets on some occasions and these get disproportionately publicized on financial media, but piggybacking their moves can beat the broader market on average. That’s why we are going to go over recent hedge fund activity in Air Products & Chemicals, Inc. (NYSE:APD).

Is Air Products & Chemicals, Inc. (NYSE:APD) a healthy stock for your portfolio? Prominent investors are getting less optimistic. The number of long hedge fund bets shrunk by 2 in recent months. Our calculations also showed that apd isn’t among the 30 most popular stocks among hedge funds.

How have hedgies been trading Air Products & Chemicals, Inc. (NYSE:APD)? 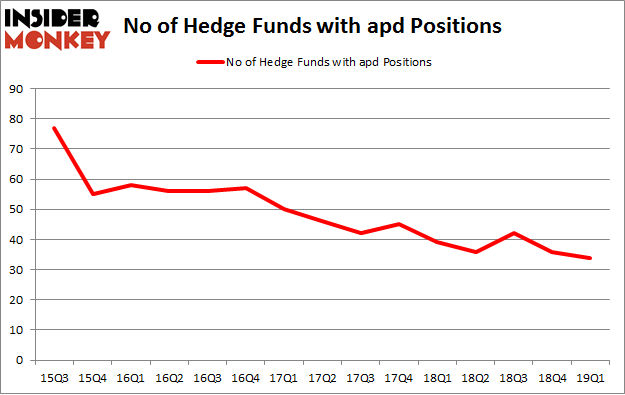 Of the funds tracked by Insider Monkey, Jonathan Barrett and Paul Segal’s Luminus Management has the largest position in Air Products & Chemicals, Inc. (NYSE:APD), worth close to $229.7 million, comprising 4.9% of its total 13F portfolio. The second most bullish fund manager is Empyrean Capital Partners, managed by Michael A. Price and Amos Meron, which holds a $118.1 million position; 5.4% of its 13F portfolio is allocated to the stock. Some other hedge funds and institutional investors that are bullish encompass John Overdeck and David Siegel’s Two Sigma Advisors, D. E. Shaw’s D E Shaw and Michael Doheny’s Freshford Capital Management.

Due to the fact that Air Products & Chemicals, Inc. (NYSE:APD) has experienced a decline in interest from the entirety of the hedge funds we track, it’s easy to see that there exists a select few hedge funds that elected to cut their full holdings heading into Q3. It’s worth mentioning that Brandon Haley’s Holocene Advisors dropped the largest investment of the “upper crust” of funds tracked by Insider Monkey, worth close to $91.3 million in stock, and Dmitry Balyasny’s Balyasny Asset Management was right behind this move, as the fund said goodbye to about $37.3 million worth. These bearish behaviors are important to note, as total hedge fund interest fell by 2 funds heading into Q3.

As you can see these stocks had an average of 30 hedge funds with bullish positions and the average amount invested in these stocks was $1554 million. That figure was $829 million in APD’s case. Cognizant Technology Solutions Corp (NASDAQ:CTSH) is the most popular stock in this table. On the other hand TC Energy Corporation (NYSE:TRP) is the least popular one with only 12 bullish hedge fund positions. Air Products & Chemicals, Inc. (NYSE:APD) is not the most popular stock in this group but hedge fund interest is still above average. Our calculations showed that top 20 most popular stocks among hedge funds returned 1.9% in Q2 through May 30th and outperformed the S&P 500 ETF (SPY) by more than 3 percentage points. Hedge funds were also right about betting on APD as the stock returned 7% during the same period and outperformed the market by an even larger margin. Hedge funds were rewarded for their relative bullishness.