Did Hedge Funds Drop The Ball On Zumiez Inc. (ZUMZ) ?

Before we spend days researching a stock idea we’d like to take a look at how hedge funds and billionaire investors recently traded that stock. S&P 500 Index ETF (SPY) lost 13.5% in the fourth quarter. Seven out of 11 industry groups in the S&P 500 Index were down more than 20% from their 52-week highs at the trough of the stock market crash. The average return of a randomly picked stock in the index was even worse. This means you (or a monkey throwing a dart) have less than an even chance of beating the market by randomly picking a stock. On the other hand, the top 15 most popular S&P 500 stocks among hedge funds not only recouped their Q4 losses but also outperformed the index by more than 3 percentage points. In this article, we will take a look at what hedge funds think about Zumiez Inc. (NASDAQ:ZUMZ).

Zumiez Inc. (NASDAQ:ZUMZ) shareholders have witnessed a decrease in hedge fund interest lately. ZUMZ was in 12 hedge funds’ portfolios at the end of December. There were 17 hedge funds in our database with ZUMZ holdings at the end of the previous quarter. Our calculations also showed that zumz isn’t among the 30 most popular stocks among hedge funds.

What have hedge funds been doing with Zumiez Inc. (NASDAQ:ZUMZ)?

At the end of the fourth quarter, a total of 12 of the hedge funds tracked by Insider Monkey held long positions in this stock, a change of -29% from the previous quarter. The graph below displays the number of hedge funds with bullish position in ZUMZ over the last 14 quarters. So, let’s review which hedge funds were among the top holders of the stock and which hedge funds were making big moves. 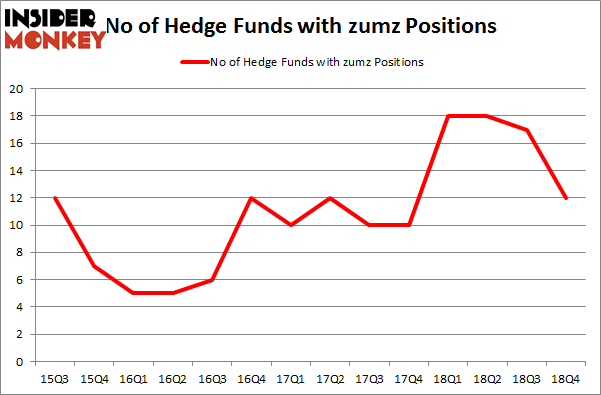 Of the funds tracked by Insider Monkey, Renaissance Technologies, managed by Jim Simons, holds the number one position in Zumiez Inc. (NASDAQ:ZUMZ). Renaissance Technologies has a $16.1 million position in the stock, comprising less than 0.1%% of its 13F portfolio. Coming in second is Cliff Asness of AQR Capital Management, with a $6.3 million position; less than 0.1%% of its 13F portfolio is allocated to the company. Remaining members of the smart money that hold long positions contain Dmitry Balyasny’s Balyasny Asset Management, Peter Rathjens, Bruce Clarke and John Campbell’s Arrowstreet Capital and Ken Griffin’s Citadel Investment Group.

Seeing as Zumiez Inc. (NASDAQ:ZUMZ) has witnessed a decline in interest from hedge fund managers, it’s easy to see that there exists a select few hedge funds who were dropping their entire stakes in the third quarter. It’s worth mentioning that Noam Gottesman’s GLG Partners dropped the largest investment of the 700 funds followed by Insider Monkey, comprising about $10.2 million in stock, and Lee Ainslie’s Maverick Capital was right behind this move, as the fund cut about $3 million worth. These bearish behaviors are important to note, as aggregate hedge fund interest dropped by 5 funds in the third quarter.

As you can see these stocks had an average of 11.25 hedge funds with bullish positions and the average amount invested in these stocks was $52 million. That figure was $38 million in ZUMZ’s case. Epizyme Inc (NASDAQ:EPZM) is the most popular stock in this table. On the other hand Transenterix Inc (NYSE:TRXC) is the least popular one with only 8 bullish hedge fund positions. Zumiez Inc. (NASDAQ:ZUMZ) is not the most popular stock in this group but hedge fund interest is still above average. Our calculations showed that top 15 most popular stocks) among hedge funds returned 24.2% through April 22nd and outperformed the S&P 500 ETF (SPY) by more than 7 percentage points. Hedge funds were also right about betting on ZUMZ as the stock returned 37.8% and outperformed the market by an even larger margin. Hedge funds were rewarded for their relative bullishness.

Did Hedge Funds Drop The Ball On Select Energy Services, Inc. (WTTR) ?
Monthly Newsletter Strategy
Download a free copy of our newsletter and see the details inside!
Hedge Fund Resource Center
Related News
Here is What Hedge Funds Think About Zumiez Inc. (ZUMZ) How Zumiez Inc. (ZUMZ) Stacks Up Against Its Peers Why Traders Are Keenly Watching Twitter, Zumiez, Idera, and More All the Details On 5 Companies’ Latest Quarterly Results, Including Restoration Hardware (RH) Why Are Investors Bullish On These Five Stocks On Thursday? What do Hedge Funds Think of Zumiez Inc. (ZUMZ)? Hedge Fund Sentiment Suggest You Shouldn’t Buy These Three Stocks on the Dip 25 Cities with the Most Unfaithful Wives 6 Easiest Programming Languages for Middle School Students 18 Cute Tinder Bio Examples (Female)
Billionaire Hedge Funds