Here is What Hedge Funds Think About Worldpay, Inc. (WP)?

Is Worldpay, Inc. (NYSE:WP) a healthy stock for your portfolio? Money managers are selling. The number of bullish hedge fund positions shrunk by 12 lately. Our calculations also showed that WP isn’t among the 30 most popular stocks among hedge funds. WP was in 48 hedge funds’ portfolios at the end of December. There were 60 hedge funds in our database with WP holdings at the end of the previous quarter. 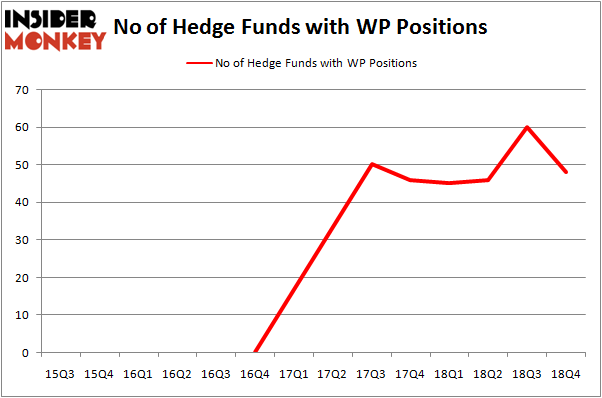 The largest stake in Worldpay, Inc. (NYSE:WP) was held by Select Equity Group, which reported holding $398.8 million worth of stock at the end of September. It was followed by Diamond Hill Capital with a $321.3 million position. Other investors bullish on the company included Citadel Investment Group, Third Point, and Steadfast Capital Management.

Judging by the fact that Worldpay, Inc. (NYSE:WP) has experienced falling interest from the smart money, we can see that there were a few funds that slashed their full holdings in the third quarter. Intriguingly, John Armitage’s Egerton Capital Limited dumped the biggest stake of the “upper crust” of funds tracked by Insider Monkey, totaling an estimated $283.7 million in stock, and Larry Robbins’s Glenview Capital was right behind this move, as the fund cut about $93.6 million worth. These moves are intriguing to say the least, as total hedge fund interest dropped by 12 funds in the third quarter.

As you can see these stocks had an average of 37.75 hedge funds with bullish positions and the average amount invested in these stocks was $1351 million. That figure was $2362 million in WP’s case. Electronic Arts Inc. (NASDAQ:EA) is the most popular stock in this table. On the other hand Southern Copper Corporation (NYSE:SCCO) is the least popular one with only 15 bullish hedge fund positions. Worldpay, Inc. (NYSE:WP) is not the most popular stock in this group but hedge fund interest is still above average. This is a slightly positive signal but we’d rather spend our time researching stocks that hedge funds are piling on.Our calculations showed that top 15 most popular stocks among hedge funds returned 19.7% through March 15th and outperformed the S&P 500 ETF (SPY) by 6.6 percentage points. A few hedge funds were also right about betting on Worldpay as the stock returned 29.1% and outperformed the market as well.

Is IQVIA Holdings, Inc. (IQV) A Good Stock To Buy?
Monthly Newsletter Strategy
Download a free copy of our newsletter and see the details inside!
Hedge Fund Resource Center
Related News
Is Worldpay, Inc. (WP) A Good Stock To Buy According To Hedge Funds? 3 Underrated Stocks That Just Hit Goldman’s Hedge Fund VIP List Ten of the Most Common Addictions 13 African Countries with the Largest White Population in 2018 6 Causes of Human Trafficking in Africa, India, and US
Billionaire Hedge Funds