Hedge funds are not perfect. They have their bad picks just like everyone else. Facebook, a stock hedge funds have loved, lost nearly 40% of its value at one point in 2018. Although hedge funds are not perfect, their consensus picks do deliver solid returns, however. Our data show the top 15 S&P 500 stocks among hedge funds at the end of December 2018 yielded an average return of 19.7% year-to-date, vs. a gain of 13.1% for the S&P 500 Index. Because hedge funds have a lot of resources and their consensus picks do well, we pay attention to what they think. In this article, we analyze what the elite funds think of Western Digital Corporation (NASDAQ:WDC).

Western Digital Corporation (NASDAQ:WDC) has seen a decrease in hedge fund sentiment in recent months. WDC was in 25 hedge funds’ portfolios at the end of the fourth quarter of 2018. There were 33 hedge funds in our database with WDC positions at the end of the previous quarter. Our calculations also showed that WDC isn’t among the 30 most popular stocks among hedge funds. 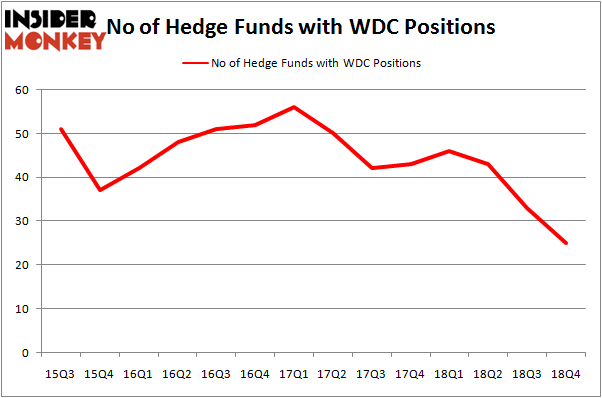 Among these funds, Iridian Asset Management held the most valuable stake in Western Digital Corporation (NASDAQ:WDC), which was worth $218.9 million at the end of the third quarter. On the second spot was AQR Capital Management which amassed $79.4 million worth of shares. Moreover, Citadel Investment Group, Renaissance Technologies, and D E Shaw were also bullish on Western Digital Corporation (NASDAQ:WDC), allocating a large percentage of their portfolios to this stock.

Due to the fact that Western Digital Corporation (NASDAQ:WDC) has experienced falling interest from the entirety of the hedge funds we track, it’s easy to see that there lies a certain “tier” of hedge funds that elected to cut their full holdings last quarter. Intriguingly, Philippe Laffont’s Coatue Management said goodbye to the biggest stake of all the hedgies followed by Insider Monkey, valued at close to $45.5 million in call options. Noam Gottesman’s fund, GLG Partners, also dropped its call options, about $29.3 million worth. These transactions are intriguing to say the least, as total hedge fund interest was cut by 8 funds last quarter.

Let’s go over hedge fund activity in other stocks – not necessarily in the same industry as Western Digital Corporation (NASDAQ:WDC) but similarly valued. We will take a look at Icahn Enterprises LP (NASDAQ:IEP), DexCom, Inc. (NASDAQ:DXCM), Marvell Technology Group Ltd. (NASDAQ:MRVL), and The J.M. Smucker Company (NYSE:SJM). This group of stocks’ market valuations are closest to WDC’s market valuation.

As you can see these stocks had an average of 23 hedge funds with bullish positions and the average amount invested in these stocks was $3119 million. That figure was $566 million in WDC’s case. Marvell Technology Group Ltd. (NASDAQ:MRVL) is the most popular stock in this table. On the other hand Icahn Enterprises LP (NASDAQ:IEP) is the least popular one with only 6 bullish hedge fund positions. Western Digital Corporation (NASDAQ:WDC) is not the most popular stock in this group but hedge fund interest is still above average. This is a slightly positive signal but we’d rather spend our time researching stocks that hedge funds are piling on. Our calculations showed that top 15 most popular stocks among hedge funds returned 19.7% through March 15th and outperformed the S&P 500 ETF (SPY) by 6.6 percentage points. Hedge funds were also right about betting on WDC as the stock returned 30.1% and outperformed the market as well. You can see the entire list of these shrewd hedge funds here.