Did Hedge Funds Drop The Ball On Visteon Corp (VC)?

Visteon Corp (NASDAQ:VC) has seen a decrease in activity from the world’s largest hedge funds of late. VC was in 17 hedge funds’ portfolios at the end of the second quarter of 2019. There were 21 hedge funds in our database with VC holdings at the end of the previous quarter. Our calculations also showed that VC isn’t among the 30 most popular stocks among hedge funds (see the video below).

To the average investor there are several tools shareholders have at their disposal to assess their holdings. A couple of the less known tools are hedge fund and insider trading indicators. We have shown that, historically, those who follow the best picks of the elite money managers can outperform the S&P 500 by a very impressive amount (see the details here). 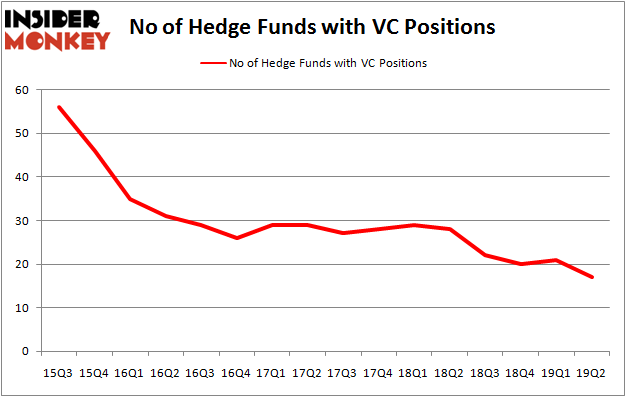 What have hedge funds been doing with Visteon Corp (NASDAQ:VC)?

According to publicly available hedge fund and institutional investor holdings data compiled by Insider Monkey, David Cohen and Harold Levy’s Iridian Asset Management has the most valuable position in Visteon Corp (NASDAQ:VC), worth close to $108 million, accounting for 1.6% of its total 13F portfolio. Sitting at the No. 2 spot is Citadel Investment Group, led by Ken Griffin, holding a $44.3 million position; less than 0.1%% of its 13F portfolio is allocated to the company. Other peers that are bullish comprise Douglas T. Granat’s Trigran Investments, Israel Englander’s Millennium Management and Gregg J. Powers’s Private Capital Management.

Seeing as Visteon Corp (NASDAQ:VC) has experienced declining sentiment from hedge fund managers, logic holds that there lies a certain “tier” of hedgies who sold off their full holdings in the second quarter. At the top of the heap, Matthew Tewksbury’s Stevens Capital Management cut the biggest investment of the “upper crust” of funds followed by Insider Monkey, totaling about $1.5 million in stock. Larry Foley and Paul Farrell’s fund, Bronson Point Partners, also said goodbye to its stock, about $1.3 million worth. These bearish behaviors are intriguing to say the least, as total hedge fund interest fell by 4 funds in the second quarter.

As you can see these stocks had an average of 22.5 hedge funds with bullish positions and the average amount invested in these stocks was $323 million. That figure was $282 million in VC’s case. Range Resources Corp. (NYSE:RRC) is the most popular stock in this table. On the other hand PriceSmart, Inc. (NASDAQ:PSMT) is the least popular one with only 15 bullish hedge fund positions. Visteon Corp (NASDAQ:VC) is not the least popular stock in this group but hedge fund interest is still below average. Our calculations showed that top 20 most popular stocks among hedge funds returned 24.4% in 2019 through September 30th and outperformed the S&P 500 ETF (SPY) by 4 percentage points. A small number of hedge funds were also right about betting on VC as the stock returned 40.9% during the same time frame and outperformed the market by an even larger margin.