The Insider Monkey team has completed processing the quarterly 13F filings for the December quarter submitted by the hedge funds and other money managers included in our extensive database. Most hedge fund investors endured a torrid quarter, which certainly propelled them to adjust their equity holdings so as to maintain the desired risk profile. As a result, the relevancy of these public filings and their content is indisputable, as they may reveal numerous high-potential stocks. The following article will discuss the smart money sentiment towards Visteon Corp (NASDAQ:VC).

Is Visteon Corp (NASDAQ:VC) a buy, sell, or hold? Hedge funds are becoming less confident. The number of long hedge fund bets dropped by 2 recently. Our calculations also showed that VC isn’t among the 30 most popular stocks among hedge funds.

Today there are plenty of tools investors employ to assess their holdings. A couple of the less known tools are hedge fund and insider trading moves. We have shown that, historically, those who follow the top picks of the elite investment managers can outclass the market by a superb margin (see the details here).

How have hedgies been trading Visteon Corp (NASDAQ:VC)? 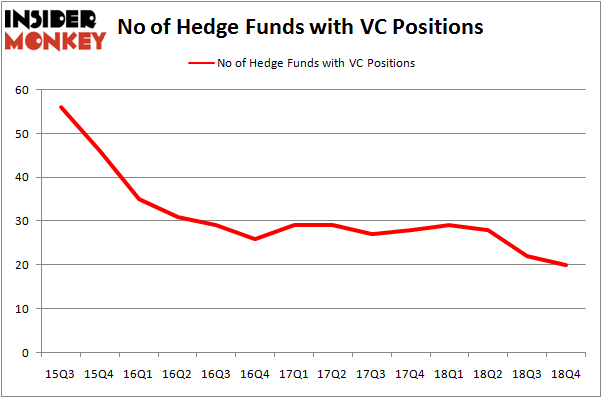 The largest stake in Visteon Corp (NASDAQ:VC) was held by Iridian Asset Management, which reported holding $142.6 million worth of stock at the end of December. It was followed by Private Capital Management with a $20.9 million position. Other investors bullish on the company included Citadel Investment Group, Trigran Investments, and Royce & Associates.

Seeing as Visteon Corp (NASDAQ:VC) has witnessed falling interest from hedge fund managers, we can see that there lies a certain “tier” of hedgies that decided to sell off their full holdings by the end of the third quarter. It’s worth mentioning that Cliff Asness’s AQR Capital Management dropped the biggest investment of the 700 funds followed by Insider Monkey, comprising close to $35.5 million in call options. Steve Cohen’s fund, Point72 Asset Management, also said goodbye to its call options, about $15.3 million worth. These bearish behaviors are intriguing to say the least, as aggregate hedge fund interest was cut by 2 funds by the end of the third quarter.

As you can see these stocks had an average of 22.5 hedge funds with bullish positions and the average amount invested in these stocks was $328 million. That figure was $249 million in VC’s case. Avis Budget Group Inc. (NASDAQ:CAR) is the most popular stock in this table. On the other hand Supernus Pharmaceuticals Inc (NASDAQ:SUPN) is the least popular one with only 15 bullish hedge fund positions. Visteon Corp (NASDAQ:VC) is not the least popular stock in this group but hedge fund interest is still below average. Our calculations showed that top 15 most popular stocks) among hedge funds returned 24.2% through April 22nd and outperformed the S&P 500 ETF (SPY) by more than 7 percentage points. A small number of hedge funds were also right about betting on VC as the stock returned 34% and outperformed the market by an even larger margin.