How do we determine whether Universal Display Corporation (NASDAQ:OLED) makes for a good investment at the moment? We analyze the sentiment of a select group of the very best investors in the world, who spend immense amounts of time and resources studying companies. They may not always be right (no one is), but data shows that their consensus long positions have historically outperformed the market when we adjust for known risk factors.

Universal Display Corporation (NASDAQ:OLED) shareholders have witnessed a decrease in hedge fund interest in recent months. OLED was in 10 hedge funds’ portfolios at the end of December. There were 20 hedge funds in our database with OLED holdings at the end of the previous quarter. Our calculations also showed that OLED isn’t among the 30 most popular stocks among hedge funds.

At the end of the fourth quarter, a total of 10 of the hedge funds tracked by Insider Monkey held long positions in this stock, a change of -50% from the previous quarter. Below, you can check out the change in hedge fund sentiment towards OLED over the last 14 quarters. With hedge funds’ positions undergoing their usual ebb and flow, there exists a select group of notable hedge fund managers who were boosting their stakes significantly (or already accumulated large positions). 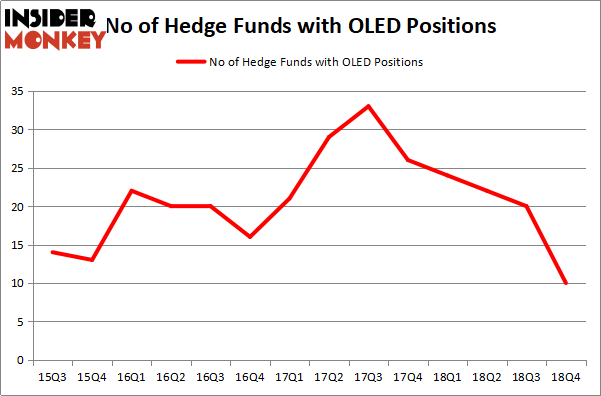 According to Insider Monkey’s hedge fund database, Citadel Investment Group, managed by Ken Griffin, holds the biggest position in Universal Display Corporation (NASDAQ:OLED). Citadel Investment Group has a $47.9 million call position in the stock, comprising less than 0.1%% of its 13F portfolio. Sitting at the No. 2 spot is Point72 Asset Management, managed by Steve Cohen, which holds a $47 million position; the fund has 0.2% of its 13F portfolio invested in the stock. Remaining members of the smart money that are bullish comprise Brian Ashford-Russell and Tim Woolley’s Polar Capital, and Matthew Hulsizer’s PEAK6 Capital Management.

Judging by the fact that Universal Display Corporation (NASDAQ:OLED) has witnessed declining sentiment from the aggregate hedge fund industry, logic holds that there lies a certain “tier” of fund managers who were dropping their entire stakes last quarter. Intriguingly, Israel Englander’s Millennium Management cut the biggest stake of the 700 funds followed by Insider Monkey, worth an estimated $50.4 million in stock. Glen Kacher’s fund, Light Street Capital, also cut its stock, about $27.1 million worth. These moves are interesting, as total hedge fund interest was cut by 10 funds last quarter.

As you can see these stocks had an average of 21 hedge funds with bullish positions and the average amount invested in these stocks was $565 million. That figure was $81 million in OLED’s case. Quanta Services Inc (NYSE:PWR) is the most popular stock in this table. On the other hand National Fuel Gas Company (NYSE:NFG) is the least popular one with only 16 bullish hedge fund positions. Compared to these stocks Universal Display Corporation (NASDAQ:OLED) is even less popular than NFG. Hedge funds clearly dropped the ball on OLED as the stock delivered strong returns, though hedge funds’ consensus picks still generated respectable returns. Our calculations showed that top 15 most popular stocks) among hedge funds returned 24.2% through April 22nd and outperformed the S&P 500 ETF (SPY) by more than 7 percentage points. A small number of hedge funds were also right about betting on OLED as the stock returned 80% and outperformed the market by an even larger margin.