We are still in an overall bull market and many stocks that smart money investors were piling into surged through the end of November. Among them, Facebook and Microsoft ranked among the top 3 picks and these stocks gained 54% and 51% respectively. Hedge funds’ top 3 stock picks returned 41.7% this year and beat the S&P 500 ETFs by 14 percentage points. Investing in index funds guarantees you average returns, not superior returns. We are looking to generate superior returns for our readers. That’s why we believe it isn’t a waste of time to check out hedge fund sentiment before you invest in a stock like Teva Pharmaceutical Industries Limited (NYSE:TEVA).

Is Teva Pharmaceutical Industries Limited (NYSE:TEVA) undervalued? Prominent investors are selling. The number of bullish hedge fund bets were trimmed by 2 lately. Our calculations also showed that TEVA isn’t among the 30 most popular stocks among hedge funds (click for Q3 rankings and see the video below for Q2 rankings).

In the financial world there are a lot of tools market participants have at their disposal to assess publicly traded companies. A pair of the less utilized tools are hedge fund and insider trading sentiment. Our researchers have shown that, historically, those who follow the top picks of the elite fund managers can outpace the broader indices by a superb margin (see the details here).

Unlike the largest US hedge funds that are convinced Dow will soar past 40,000 or the world’s most bearish hedge fund that’s more convinced than ever that a crash is coming, our long-short investment strategy doesn’t rely on bull or bear markets to deliver double digit returns. We only rely on the best performing hedge funds‘ buy/sell signals. We’re going to check out the fresh hedge fund action encompassing Teva Pharmaceutical Industries Limited (NYSE:TEVA).

Heading into the fourth quarter of 2019, a total of 23 of the hedge funds tracked by Insider Monkey were long this stock, a change of -8% from the previous quarter. By comparison, 36 hedge funds held shares or bullish call options in TEVA a year ago. With the smart money’s positions undergoing their usual ebb and flow, there exists a select group of notable hedge fund managers who were upping their stakes significantly (or already accumulated large positions). 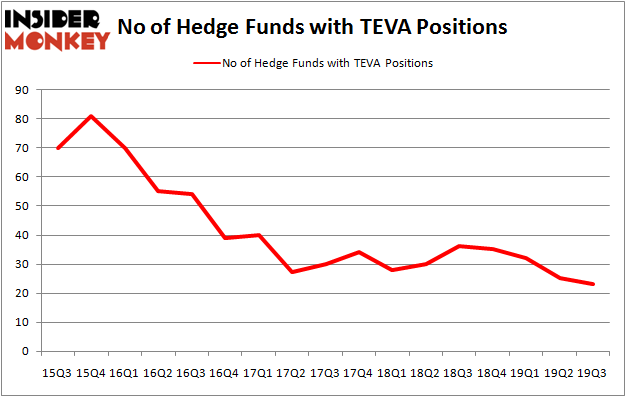 Of the funds tracked by Insider Monkey, Warren Buffett’s Berkshire Hathaway has the number one position in Teva Pharmaceutical Industries Limited (NYSE:TEVA), worth close to $297.6 million, corresponding to 0.1% of its total 13F portfolio. On Berkshire Hathaway’s heels is David Abrams of Abrams Capital Management, with a $165.4 million position; the fund has 4.6% of its 13F portfolio invested in the stock. Other peers that are bullish comprise Bill Miller’s Miller Value Partners, Renaissance Technologies and Brian Ashford-Russell and Tim Woolley’s Polar Capital. In terms of the portfolio weights assigned to each position Abrams Capital Management allocated the biggest weight to Teva Pharmaceutical Industries Limited (NYSE:TEVA), around 4.63% of its 13F portfolio. Miller Value Partners is also relatively very bullish on the stock, earmarking 2.35 percent of its 13F equity portfolio to TEVA.

Since Teva Pharmaceutical Industries Limited (NYSE:TEVA) has witnessed bearish sentiment from the smart money, it’s easy to see that there lies a certain “tier” of hedgies that decided to sell off their entire stakes by the end of the third quarter. At the top of the heap, Stephen DuBois’s Camber Capital Management dropped the biggest investment of the 750 funds monitored by Insider Monkey, worth close to $60 million in stock, and Andrew Feldstein and Stephen Siderow’s Blue Mountain Capital was right behind this move, as the fund sold off about $30 million worth. These transactions are important to note, as aggregate hedge fund interest dropped by 2 funds by the end of the third quarter.

As you can see these stocks had an average of 15.75 hedge funds with bullish positions and the average amount invested in these stocks was $380 million. That figure was $661 million in TEVA’s case. AerCap Holdings N.V. (NYSE:AER) is the most popular stock in this table. On the other hand Huaneng Power International Inc (NYSE:HNP) is the least popular one with only 3 bullish hedge fund positions. Teva Pharmaceutical Industries Limited (NYSE:TEVA) is not the most popular stock in this group but hedge fund interest is still above average. Our calculations showed that top 20 most popular stocks among hedge funds returned 37.4% in 2019 through the end of November and outperformed the S&P 500 ETF (SPY) by 9.9 percentage points. Hedge funds were also right about betting on TEVA as the stock returned 51.5% during the fourth quarter (through the end of November) and outperformed the market. Hedge funds were rewarded for their relative bullishness.