TC Energy Corporation (NYSE:TRP) shares haven’t seen a lot of action during the second quarter. Overall, hedge fund sentiment was unchanged. The stock was in 12 hedge funds’ portfolios at the end of June. The level and the change in hedge fund popularity aren’t the only variables you need to analyze to decipher hedge funds’ perspectives. A stock may witness a boost in popularity but it may still be less popular than similarly priced stocks. That’s why at the end of this article we will examine companies such as Vodafone Group Plc (NASDAQ:VOD), ING Groep N.V. (NYSE:ING), and Target Corporation (NYSE:TGT) to gather more data points.

In the 21st century investor’s toolkit there are tons of formulas stock traders use to analyze stocks. A duo of the most underrated formulas are hedge fund and insider trading sentiment. We have shown that, historically, those who follow the best picks of the elite hedge fund managers can trounce their index-focused peers by a significant amount (see the details here).

Unlike some fund managers who are betting on Dow reaching 40000 in a year, our long-short investment strategy doesn’t rely on bull markets to deliver double digit returns. We only rely on hedge fund buy/sell signals. We’re going to take a peek at the fresh hedge fund action regarding TC Energy Corporation (NYSE:TRP).

At the end of the second quarter, a total of 12 of the hedge funds tracked by Insider Monkey were bullish on this stock, a change of 0% from one quarter earlier. On the other hand, there were a total of 12 hedge funds with a bullish position in TRP a year ago. With the smart money’s sentiment swirling, there exists an “upper tier” of key hedge fund managers who were increasing their stakes significantly (or already accumulated large positions). 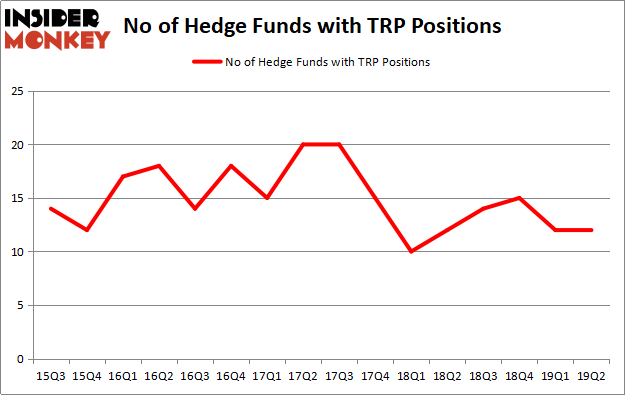 More specifically, Citadel Investment Group was the largest shareholder of TC Energy Corporation (NYSE:TRP), with a stake worth $113.6 million reported as of the end of March. Trailing Citadel Investment Group was D E Shaw, which amassed a stake valued at $43.2 million. Point72 Asset Management, Bridgewater Associates, and Renaissance Technologies were also very fond of the stock, giving the stock large weights in their portfolios.

Because TC Energy Corporation (NYSE:TRP) has witnessed a decline in interest from hedge fund managers, we can see that there lies a certain “tier” of money managers that slashed their entire stakes in the second quarter. At the top of the heap, Vince Maddi and Shawn Brennan’s SIR Capital Management dropped the largest stake of the 750 funds monitored by Insider Monkey, worth an estimated $17.7 million in stock, and Cliff Asness’s AQR Capital Management was right behind this move, as the fund said goodbye to about $2 million worth. These transactions are important to note, as total hedge fund interest stayed the same (this is a bearish signal in our experience).

As you can see these stocks had an average of 15.5 hedge funds with bullish positions and the average amount invested in these stocks was $546 million. That figure was $228 million in TRP’s case. Target Corporation (NYSE:TGT) is the most popular stock in this table. On the other hand Banco de Chile (NYSE:BCH) is the least popular one with only 6 bullish hedge fund positions. TC Energy Corporation (NYSE:TRP) is not the least popular stock in this group but hedge fund interest is still below average. Our calculations showed that top 20 most popular stocks among hedge funds returned 24.4% in 2019 through September 30th and outperformed the S&P 500 ETF (SPY) by 4 percentage points. A small number of hedge funds were also right about betting on TRP, though not to the same extent, as the stock returned 5.7% during the third quarter and outperformed the market.