Hedge fund managers like David Einhorn, Bill Ackman, or Carl Icahn became billionaires through reaping large profits for their investors, which is why piggybacking their stock picks may provide us with significant returns as well. Many hedge funds, like Paul Singer’s Elliott Management, are pretty secretive, but we can still get some insights by analyzing their quarterly 13F filings. One of the most fertile grounds for large abnormal returns is hedge funds’ most popular small-cap picks, which are not so widely followed and often trade at a discount to their intrinsic value. In this article we will check out hedge fund activity in another small-cap stock: Solaris Oilfield Infrastructure, Inc. (NYSE:SOI).

Is Solaris Oilfield Infrastructure, Inc. (NYSE:SOI) ready to rally soon? Money managers are in an optimistic mood. The number of bullish hedge fund bets advanced by 1 lately. Our calculations also showed that soi isn’t among the 30 most popular stocks among hedge funds.

At the end of the fourth quarter, a total of 15 of the hedge funds tracked by Insider Monkey were bullish on this stock, a change of 7% from the previous quarter. The graph below displays the number of hedge funds with bullish position in SOI over the last 14 quarters. With the smart money’s positions undergoing their usual ebb and flow, there exists an “upper tier” of key hedge fund managers who were adding to their stakes substantially (or already accumulated large positions). 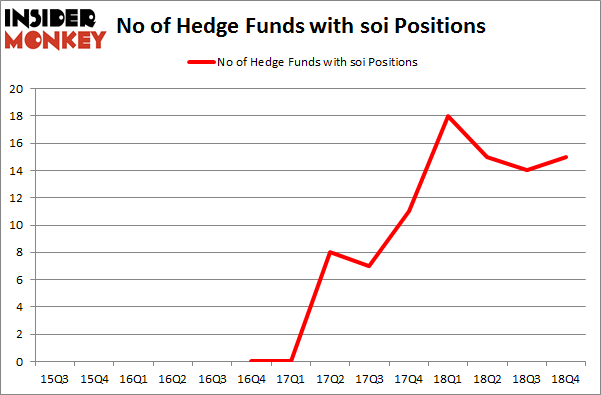 According to Insider Monkey’s hedge fund database, Blue Mountain Capital, managed by Andrew Feldstein and Stephen Siderow, holds the number one position in Solaris Oilfield Infrastructure, Inc. (NYSE:SOI). Blue Mountain Capital has a $24.1 million position in the stock, comprising 0.7% of its 13F portfolio. The second most bullish fund manager is Adage Capital Management, led by Phill Gross and Robert Atchinson, holding a $17.4 million position; the fund has less than 0.1%% of its 13F portfolio invested in the stock. Some other professional money managers with similar optimism include Todd J. Kantor’s Encompass Capital Advisors, Anand Parekh’s Alyeska Investment Group and Richard Driehaus’s Driehaus Capital.

As one would reasonably expect, key money managers have been driving this bullishness. Alyeska Investment Group, managed by Anand Parekh, initiated the most outsized position in Solaris Oilfield Infrastructure, Inc. (NYSE:SOI). Alyeska Investment Group had $8.7 million invested in the company at the end of the quarter. Arvind Sanger’s GeoSphere Capital Management also made a $1 million investment in the stock during the quarter. The other funds with brand new SOI positions are Gavin Saitowitz and Cisco J. del Valle’s Springbok Capital, Vince Maddi and Shawn Brennan’s SIR Capital Management, and Jim Simons’s Renaissance Technologies.

As you can see these stocks had an average of 13.75 hedge funds with bullish positions and the average amount invested in these stocks was $123 million. That figure was $77 million in SOI’s case. Akebia Therapeutics Inc (NASDAQ:AKBA) is the most popular stock in this table. On the other hand Textainer Group Holdings Limited (NYSE:TGH) is the least popular one with only 7 bullish hedge fund positions. Solaris Oilfield Infrastructure, Inc. (NYSE:SOI) is not the most popular stock in this group but hedge fund interest is still above average. Our calculations showed that top 15 most popular stocks) among hedge funds returned 24.2% through April 22nd and outperformed the S&P 500 ETF (SPY) by more than 7 percentage points. Hedge funds were also right about betting on SOI as the stock returned 57.4% and outperformed the market by an even larger margin. Hedge funds were rewarded for their relative bullishness.