Did Hedge Funds Drop The Ball On Redfin Corporation (RDFN) ?

Redfin Corporation (NASDAQ:RDFN) shareholders have witnessed a decrease in hedge fund interest of late. RDFN was in 7 hedge funds’ portfolios at the end of December. There were 12 hedge funds in our database with RDFN holdings at the end of the previous quarter. Our calculations also showed that RDFN isn’t among the 30 most popular stocks among hedge funds.

What have hedge funds been doing with Redfin Corporation (NASDAQ:RDFN)? 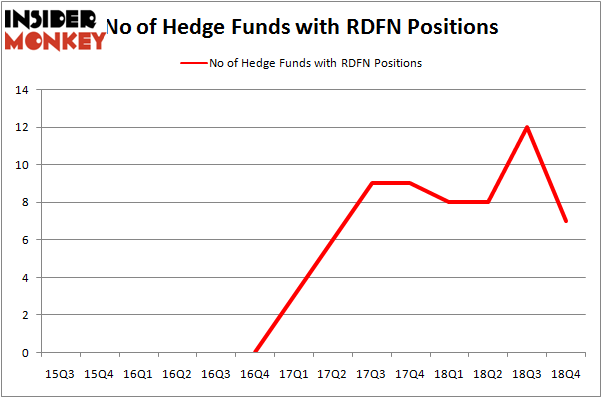 When looking at the institutional investors followed by Insider Monkey, Immersion Capital, managed by Michael Sidhom, holds the biggest position in Redfin Corporation (NASDAQ:RDFN). Immersion Capital has a $51.4 million position in the stock, comprising 15.4% of its 13F portfolio. On Immersion Capital’s heels is Tiger Global Management LLC, managed by Chase Coleman, which holds a $33.9 million position; the fund has 0.2% of its 13F portfolio invested in the stock. Other hedge funds and institutional investors that are bullish encompass Quincy Lee’s Ancient Art (Teton Capital), Daniel S. Och’s OZ Management and Christian Leone’s Luxor Capital Group.

Seeing as Redfin Corporation (NASDAQ:RDFN) has witnessed a decline in interest from the entirety of the hedge funds we track, logic holds that there lies a certain “tier” of funds that decided to sell off their full holdings by the end of the third quarter. It’s worth mentioning that Michael Pausic’s Foxhaven Asset Management sold off the biggest stake of the 700 funds followed by Insider Monkey, valued at close to $8.9 million in stock, and Seymour Sy Kaufman and Michael Stark’s Crosslink Capital was right behind this move, as the fund cut about $4.7 million worth. These transactions are intriguing to say the least, as aggregate hedge fund interest fell by 5 funds by the end of the third quarter.

As you can see these stocks had an average of 15.5 hedge funds with bullish positions and the average amount invested in these stocks was $82 million. That figure was $114 million in RDFN’s case. GameStop Corp. (NYSE:GME) is the most popular stock in this table. On the other hand Hailiang Education Group Inc. (NASDAQ:HLG) is the least popular one with only 3 bullish hedge fund positions. Redfin Corporation (NASDAQ:RDFN) is not the least popular stock in this group but hedge fund interest is still below average. Our calculations showed that top 15 most popular stocks) among hedge funds returned 24.2% through April 22nd and outperformed the S&P 500 ETF (SPY) by more than 7 percentage points. A small number of hedge funds were also right about betting on RDFN as the stock returned 49.2% and outperformed the market by an even larger margin.