Hedge funds and large money managers usually invest with a focus on the long-term horizon and, therefore, short-lived dips on the charts, usually don’t make them change their opinion towards a company. This time it may be different. During the fourth quarter of 2018 we observed increased volatility and small-cap stocks underperformed the market. Hedge fund investor letters indicated that they are cutting their overall exposure, closing out some position and doubling down on others. Let’s take a look at the hedge fund sentiment towards Reata Pharmaceuticals, Inc. (NASDAQ:RETA) to find out whether it was one of their high conviction long-term ideas.

Hedge fund interest in Reata Pharmaceuticals, Inc. (NASDAQ:RETA) shares was flat at the end of last quarter. This is usually a negative indicator. At the end of this article we will also compare RETA to other stocks including Baozun Inc (NASDAQ:BZUN), Stepan Company (NYSE:SCL), and Crescent Point Energy Corp (NYSE:CPG) to get a better sense of its popularity.

What does the smart money think about Reata Pharmaceuticals, Inc. (NASDAQ:RETA)? 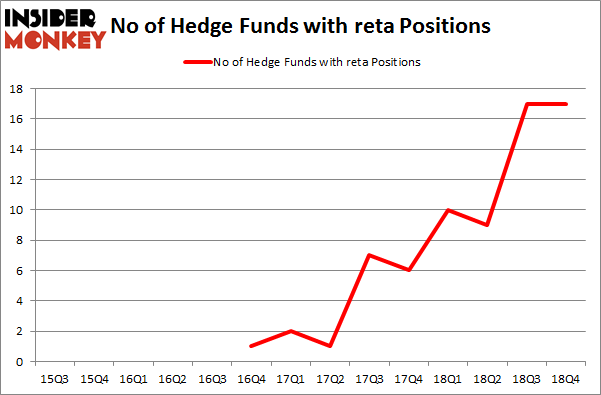 When looking at the institutional investors followed by Insider Monkey, Thomas Steyer’s Farallon Capital has the most valuable position in Reata Pharmaceuticals, Inc. (NASDAQ:RETA), worth close to $39.3 million, amounting to 0.3% of its total 13F portfolio. On Farallon Capital’s heels is Bihua Chen of Cormorant Asset Management, with a $37.8 million position; 3.1% of its 13F portfolio is allocated to the stock. Some other hedge funds and institutional investors that are bullish comprise James E. Flynn’s Deerfield Management, Steve Cohen’s Point72 Asset Management and Lawrence Hawkins’s Prosight Capital.

Due to the fact that Reata Pharmaceuticals, Inc. (NASDAQ:RETA) has faced declining sentiment from the aggregate hedge fund industry, we can see that there was a specific group of fund managers who were dropping their full holdings by the end of the third quarter. Interestingly, Louis Bacon’s Moore Global Investments dropped the largest position of the “upper crust” of funds monitored by Insider Monkey, comprising about $1.2 million in stock. Joseph Edelman’s fund, Perceptive Advisors, also sold off its stock, about $0.8 million worth. These bearish behaviors are important to note, as total hedge fund interest stayed the same (this is a bearish signal in our experience).

As you can see these stocks had an average of 12.25 hedge funds with bullish positions and the average amount invested in these stocks was $42 million. That figure was $159 million in RETA’s case. Crescent Point Energy Corp (NYSE:CPG) is the most popular stock in this table. On the other hand Coca-Cola Consolidated, Inc. (NASDAQ:COKE) is the least popular one with only 7 bullish hedge fund positions. Compared to these stocks Reata Pharmaceuticals, Inc. (NASDAQ:RETA) is more popular among hedge funds. Our calculations showed that top 15 most popular stocks) among hedge funds returned 24.2% through April 22nd and outperformed the S&P 500 ETF (SPY) by more than 7 percentage points. Hedge funds were also right about betting on RETA as the stock returned 38.5% and outperformed the market by an even larger margin. Hedge funds were clearly right about piling into this stock relative to other stocks with similar market capitalizations.