While the market driven by short-term sentiment influenced by uncertainty regarding the future of the interest rate environment in the US, declining oil prices and the trade war with China, many smart money investors kept their optimism regarding the current bull run in the fourth quarter, while still hedging many of their long positions. However, as we know, big investors usually buy stocks with strong fundamentals, which is why we believe we can profit from imitating them. In this article, we are going to take a look at the smart money sentiment surrounding Puma Biotechnology Inc (NASDAQ:PBYI).

Hedge fund interest in Puma Biotechnology Inc (NASDAQ:PBYI) shares was flat at the end of last quarter. This is usually a negative indicator. The level and the change in hedge fund popularity aren’t the only variables you need to analyze to decipher hedge funds’ perspectives. A stock may witness a boost in popularity but it may still be less popular than similarly priced stocks. That’s why at the end of this article we will examine companies such as Meridian Interstate Bancorp, Inc. (NASDAQ:EBSB), TCG BDC, Inc. (NASDAQ:CGBD), and Winnebago Industries, Inc. (NYSE:WGO) to gather more data points.

What does the smart money think about Puma Biotechnology Inc (NASDAQ:PBYI)? 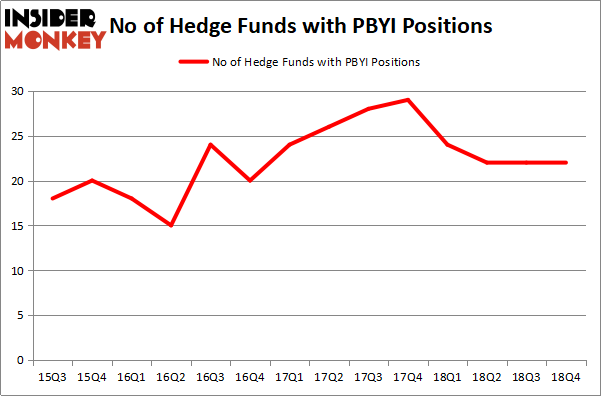 More specifically, OrbiMed Advisors was the largest shareholder of Puma Biotechnology Inc (NASDAQ:PBYI), with a stake worth $52.9 million reported as of the end of December. Trailing OrbiMed Advisors was Great Point Partners, which amassed a stake valued at $28.1 million. Sarissa Capital Management, Millennium Management, and Camber Capital Management were also very fond of the stock, giving the stock large weights in their portfolios.

Seeing as Puma Biotechnology Inc (NASDAQ:PBYI) has witnessed falling interest from the aggregate hedge fund industry, logic holds that there were a few hedge funds that decided to sell off their full holdings last quarter. It’s worth mentioning that Mitchell Blutt’s Consonance Capital Management dropped the largest stake of all the hedgies followed by Insider Monkey, worth close to $105.6 million in stock, and Christopher James’s Partner Fund Management was right behind this move, as the fund dumped about $84.9 million worth. These transactions are interesting, as aggregate hedge fund interest stayed the same (this is a bearish signal in our experience).

As you can see these stocks had an average of 14.25 hedge funds with bullish positions and the average amount invested in these stocks was $77 million. That figure was $248 million in PBYI’s case. Verso Corporation (NYSE:VRS) is the most popular stock in this table. On the other hand Meridian Bancorp, Inc. (NASDAQ:EBSB) is the least popular one with only 10 bullish hedge fund positions. Puma Biotechnology Inc (NASDAQ:PBYI) is not the most popular stock in this group but hedge fund interest is still above average. Our calculations showed that top 15 most popular stocks) among hedge funds returned 24.2% through April 22nd and outperformed the S&P 500 ETF (SPY) by more than 7 percentage points. Hedge funds were also right about betting on PBYI as the stock returned 66.3% and outperformed the market by an even larger margin. Hedge funds were rewarded for their relative bullishness.