Our extensive research has shown that imitating the smart money can generate significant returns for retail investors, which is why we track nearly 750 active prominent money managers and analyze their quarterly 13F filings. The stocks that are heavily bought by hedge funds historically outperformed the market, though there is no shortage of high profile failures like hedge funds’ recent losses in Facebook. Let’s take a closer look at what the funds we track think about Plains All American Pipeline, L.P. (NYSE:PAA) in this article.

Is Plains All American Pipeline, L.P. (NYSE:PAA) a buy here? Hedge funds are taking a bearish view. The number of bullish hedge fund bets were cut by 2 lately. Our calculations also showed that PAA isn’t among the 30 most popular stocks among hedge funds.

At Q4’s end, a total of 8 of the hedge funds tracked by Insider Monkey held long positions in this stock, a change of -20% from one quarter earlier. By comparison, 8 hedge funds held shares or bullish call options in PAA a year ago. With hedgies’ sentiment swirling, there exists an “upper tier” of noteworthy hedge fund managers who were upping their stakes substantially (or already accumulated large positions). 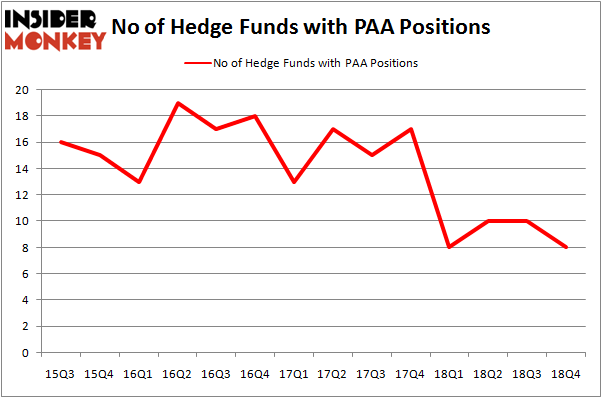 According to Insider Monkey’s hedge fund database, Renaissance Technologies, managed by Jim Simons, holds the largest position in Plains All American Pipeline, L.P. (NYSE:PAA). Renaissance Technologies has a $20.9 million position in the stock, comprising less than 0.1%% of its 13F portfolio. The second largest stake is held by Soroban Capital Partners, managed by Eric W. Mandelblatt and Gaurav Kapadia, which holds a $10.9 million call position; 0.2% of its 13F portfolio is allocated to the company. Some other members of the smart money that hold long positions include Ken Griffin’s Citadel Investment Group, Michael Price’s MFP Investors and T Boone Pickens’s BP Capital.

Since Plains All American Pipeline, L.P. (NYSE:PAA) has witnessed a decline in interest from the entirety of the hedge funds we track, it’s safe to say that there exists a select few fund managers who were dropping their full holdings in the third quarter. Interestingly, Richard Driehaus’s Driehaus Capital dropped the biggest stake of the “upper crust” of funds monitored by Insider Monkey, comprising an estimated $0.9 million in stock. Daniel Arbess’s fund, Perella Weinberg Partners, also cut its stock, about $0.5 million worth. These moves are intriguing to say the least, as aggregate hedge fund interest fell by 2 funds in the third quarter.

As you can see these stocks had an average of 28.25 hedge funds with bullish positions and the average amount invested in these stocks was $825 million. That figure was $49 million in PAA’s case. Ulta Beauty, Inc. (NASDAQ:ULTA) is the most popular stock in this table. On the other hand First Republic Bank (NYSE:FRC) is the least popular one with only 15 bullish hedge fund positions. Compared to these stocks Plains All American Pipeline, L.P. (NYSE:PAA) is even less popular than FRC. Considering that hedge funds aren’t fond of this stock in relation to other companies analyzed in this article, it may be a good idea to analyze it in detail and understand why the smart money isn’t behind this stock. This isn’t necessarily bad news. Although it is possible that hedge funds may think the stock is overpriced and view the stock as a short candidate, they may not be very familiar with the bullish thesis. Our calculations showed that top 15 most popular stocks among hedge funds returned 19.7% through March 15th and outperformed the S&P 500 ETF (SPY) by 6.6 percentage points. A handful of hedge funds were also right about betting on PAA as the stock returned 22.8% and outperformed the market as well.

Do Hedge Funds Love CenturyLink, Inc. (NYSE:CTL)?
Monthly Newsletter Strategy
Download a free copy of our newsletter and see the details inside!
Hedge Fund Resource Center
Related News
5 Fairly Valued MLPs: Is The Dilution Worth The Yield And How Do You Value Them? Here Is What Hedge Funds Think About Plains All American Pipeline, L.P. (PAA) Massive Cluster of Insider Selling at Western Alliance, Executives at Insulin Pump Maker Buy Shares Amid Harmful Allegations Against the Company, Plus Other Insider Trading Surging Insider Buying Witnessed at These 4 Companies Why Are Investors Driving Up The Price of These 5 Stocks? Five MLPs Hedge Funds Love What Can Investors Learn From These Companies’ Insider Buying Activity? Hedge Funds Have Never Been This Bullish On Visa Inc (V) Ten of the Most Common Addictions 13 African Countries with the Largest White Population in 2018
Billionaire Hedge Funds