Hedge funds are not perfect. They have their bad picks just like everyone else. Facebook, a stock hedge funds have loved, lost nearly 40% of its value at one point in 2018. Although hedge funds are not perfect, their consensus picks do deliver solid returns, however. Our data show the top 15 S&P 500 stocks among hedge funds at the end of December 2018 yielded an average return of 19.7% year-to-date, vs. a gain of 13.1% for the S&P 500 Index. Because hedge funds have a lot of resources and their consensus picks do well, we pay attention to what they think. In this article, we analyze what the elite funds think of OneMain Holdings Inc (NYSE:OMF).

OneMain Holdings Inc (NYSE:OMF) investors should be aware of a decrease in support from the world’s most elite money managers lately. OMF was in 22 hedge funds’ portfolios at the end of the fourth quarter of 2018. There were 26 hedge funds in our database with OMF holdings at the end of the previous quarter. Our calculations also showed that omf isn’t among the 30 most popular stocks among hedge funds.

At Q4’s end, a total of 22 of the hedge funds tracked by Insider Monkey held long positions in this stock, a change of -15% from one quarter earlier. On the other hand, there were a total of 25 hedge funds with a bullish position in OMF a year ago. With hedgies’ sentiment swirling, there exists a select group of key hedge fund managers who were boosting their stakes significantly (or already accumulated large positions). 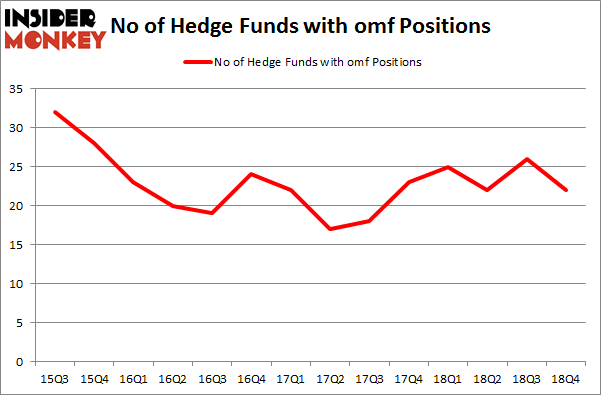 Among these funds, Basswood Capital held the most valuable stake in OneMain Holdings Inc (NYSE:OMF), which was worth $66.8 million at the end of the third quarter. On the second spot was Toscafund Asset Management which amassed $31.3 million worth of shares. Moreover, Carlson Capital, Point72 Asset Management, and Adage Capital Management were also bullish on OneMain Holdings Inc (NYSE:OMF), allocating a large percentage of their portfolios to this stock.

Since OneMain Holdings Inc (NYSE:OMF) has experienced falling interest from the aggregate hedge fund industry, it’s easy to see that there lies a certain “tier” of fund managers who were dropping their entire stakes in the third quarter. Interestingly, Jim Simons’s Renaissance Technologies cut the biggest position of the “upper crust” of funds tracked by Insider Monkey, valued at about $14.1 million in stock, and Howard Guberman’s Gruss Asset Management was right behind this move, as the fund dropped about $13.4 million worth. These bearish behaviors are interesting, as total hedge fund interest dropped by 4 funds in the third quarter.

Let’s now take a look at hedge fund activity in other stocks – not necessarily in the same industry as OneMain Holdings Inc (NYSE:OMF) but similarly valued. We will take a look at Associated Banc-Corp (NYSE:ASB), Horizon Pharma plc (NASDAQ:HZNP), PNM Resources, Inc. (NYSE:PNM), and The Brink’s Company (NYSE:BCO). This group of stocks’ market values are similar to OMF’s market value.

As you can see these stocks had an average of 21.5 hedge funds with bullish positions and the average amount invested in these stocks was $477 million. That figure was $240 million in OMF’s case. Horizon Pharma plc (NASDAQ:HZNP) is the most popular stock in this table. On the other hand Associated Banc-Corp (NYSE:ASB) is the least popular one with only 18 bullish hedge fund positions. OneMain Holdings Inc (NYSE:OMF) is not the most popular stock in this group but hedge fund interest is still above average. Our calculations showed that top 15 most popular stocks) among hedge funds returned 24.2% through April 22nd and outperformed the S&P 500 ETF (SPY) by more than 7 percentage points. Hedge funds were also right about betting on OMF as the stock returned 36.7% and outperformed the market by an even larger margin. Hedge funds were rewarded for their relative bullishness.