Hedge funds and large money managers usually invest with a focus on the long-term horizon and, therefore, short-lived dips or bumps on the charts, usually don’t make them change their opinion towards a company. This time it may be different. During the fourth quarter of 2018 we observed increased volatility and small-cap stocks underperformed the market. Things completely reversed during the first half of 2019. Hedge fund investor letters indicated that they are cutting their overall exposure, closing out some position and doubling down on others. Let’s take a look at the hedge fund sentiment towards OneMain Holdings Inc (NYSE:OMF) to find out whether it was one of their high conviction long-term ideas.

OneMain Holdings Inc (NYSE:OMF) shareholders have witnessed a decrease in enthusiasm from smart money recently. Our calculations also showed that OMF isn’t among the 30 most popular stocks among hedge funds (view the video below).

In today’s marketplace there are a multitude of methods stock market investors have at their disposal to grade publicly traded companies. A couple of the less utilized methods are hedge fund and insider trading interest. Our researchers have shown that, historically, those who follow the top picks of the elite hedge fund managers can trounce the market by a solid margin (see the details here). 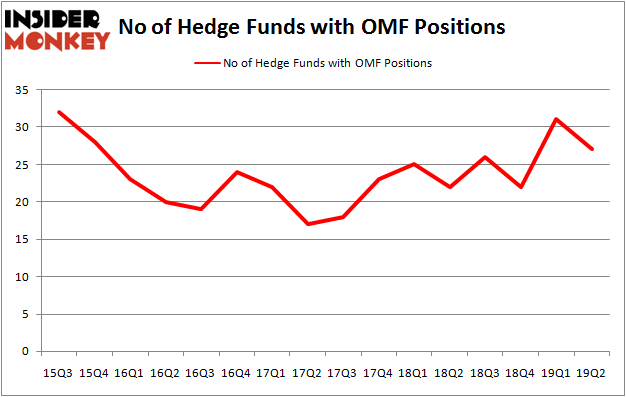 What have hedge funds been doing with OneMain Holdings Inc (NYSE:OMF)?

At Q2’s end, a total of 27 of the hedge funds tracked by Insider Monkey held long positions in this stock, a change of -13% from the previous quarter. The graph below displays the number of hedge funds with bullish position in OMF over the last 16 quarters. With hedge funds’ positions undergoing their usual ebb and flow, there exists a few notable hedge fund managers who were increasing their holdings meaningfully (or already accumulated large positions).

According to Insider Monkey’s hedge fund database, Bill Miller’s Miller Value Partners has the number one position in OneMain Holdings Inc (NYSE:OMF), worth close to $103.5 million, amounting to 3.9% of its total 13F portfolio. Coming in second is Basswood Capital, led by Matthew Lindenbaum, holding a $66.9 million position; 4.2% of its 13F portfolio is allocated to the company. Some other hedge funds and institutional investors that hold long positions consist of Israel Englander’s Millennium Management, Steve Cohen’s Point72 Asset Management and D. E. Shaw’s D E Shaw.

Since OneMain Holdings Inc (NYSE:OMF) has faced bearish sentiment from hedge fund managers, we can see that there exists a select few funds who were dropping their entire stakes in the second quarter. It’s worth mentioning that Martin Hughes’s Toscafund Asset Management dumped the biggest stake of all the hedgies tracked by Insider Monkey, valued at about $12.3 million in stock, and Paul Marshall and Ian Wace’s Marshall Wace LLP was right behind this move, as the fund said goodbye to about $2.5 million worth. These transactions are interesting, as total hedge fund interest dropped by 4 funds in the second quarter.

As you can see these stocks had an average of 15.75 hedge funds with bullish positions and the average amount invested in these stocks was $177 million. That figure was $360 million in OMF’s case. Affiliated Managers Group, Inc. (NYSE:AMG) is the most popular stock in this table. On the other hand Tilray, Inc. (NASDAQ:TLRY) is the least popular one with only 11 bullish hedge fund positions. Compared to these stocks OneMain Holdings Inc (NYSE:OMF) is more popular among hedge funds. Our calculations showed that top 20 most popular stocks among hedge funds returned 24.4% in 2019 through September 30th and outperformed the S&P 500 ETF (SPY) by 4 percentage points. Hedge funds were also right about betting on OMF as the stock returned 15.3% during Q3 and outperformed the market by an even larger margin. Hedge funds were clearly right about piling into this stock relative to other stocks with similar market capitalizations.