With the first-quarter round of 13F filings behind us it is time to take a look at the stocks in which some of the best money managers in the world preferred to invest or sell heading into the second quarter. One of these stocks was NRG Energy Inc (NYSE:NRG).

Is NRG Energy Inc (NYSE:NRG) a healthy stock for your portfolio? Prominent investors are in an optimistic mood. The number of long hedge fund positions improved by 2 recently. Our calculations also showed that NRG isn’t among the 30 most popular stocks among hedge funds (view the video below). NRG was in 42 hedge funds’ portfolios at the end of June. There were 40 hedge funds in our database with NRG positions at the end of the previous quarter. 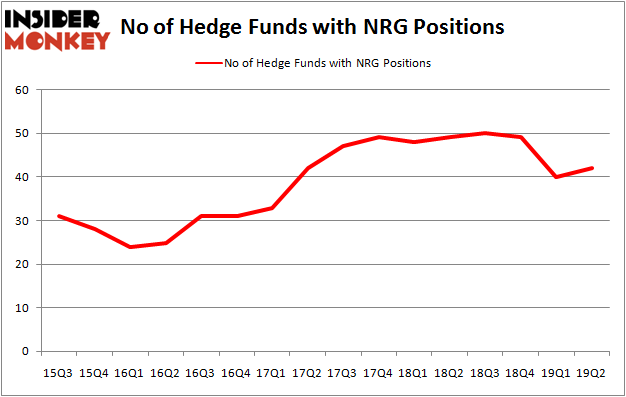 Unlike some fund managers who are betting on Dow reaching 40000 in a year, our long-short investment strategy doesn’t rely on bull markets to deliver double digit returns. We only rely on hedge fund buy/sell signals. We’re going to take a glance at the new hedge fund action regarding NRG Energy Inc (NYSE:NRG).

At the end of the second quarter, a total of 42 of the hedge funds tracked by Insider Monkey held long positions in this stock, a change of 5% from one quarter earlier. Below, you can check out the change in hedge fund sentiment towards NRG over the last 16 quarters. With the smart money’s sentiment swirling, there exists an “upper tier” of notable hedge fund managers who were upping their holdings substantially (or already accumulated large positions).

According to publicly available hedge fund and institutional investor holdings data compiled by Insider Monkey, Brahman Capital, managed by Mitch Kuflik and Rob Sobel, holds the most valuable position in NRG Energy Inc (NYSE:NRG). Brahman Capital has a $211 million position in the stock, comprising 20.1% of its 13F portfolio. The second largest stake is held by Robert Pitts of Steadfast Capital Management, with a $203.2 million position; 2.7% of its 13F portfolio is allocated to the company. Other peers that hold long positions contain Jonathan Barrett and Paul Segal’s Luminus Management, Ken Griffin’s Citadel Investment Group and Noam Gottesman’s GLG Partners.

As you can see these stocks had an average of 27.25 hedge funds with bullish positions and the average amount invested in these stocks was $697 million. That figure was $1548 million in NRG’s case. RingCentral Inc (NYSE:RNG) is the most popular stock in this table. On the other hand Vedanta Ltd (NYSE:VEDL) is the least popular one with only 8 bullish hedge fund positions. NRG Energy Inc (NYSE:NRG) is not the most popular stock in this group but hedge fund interest is still above average. Our calculations showed that top 20 most popular stocks among hedge funds returned 24.4% in 2019 through September 30th and outperformed the S&P 500 ETF (SPY) by 4 percentage points. Hedge funds were also right about betting on NRG as the stock returned 12.9% during the third quarter and outperformed the market. Hedge funds were rewarded for their relative bullishness.