Like everyone else, elite investors make mistakes. Some of their top consensus picks, such as Amazon, Facebook and Alibaba, have not done well in Q4 due to various reasons. Nevertheless, the data show elite investors’ consensus picks have done well on average over the long-term. The top 15 S&P 500 stocks among hedge funds at the end of September 2018 returned an average of 1% through March 15th whereas the S&P 500 Index ETF lost 2.2% during the same period. Because their consensus picks have done well, we pay attention to what elite funds think before doing extensive research on a stock. In this article, we take a closer look at Neurocrine Biosciences, Inc. (NASDAQ:NBIX) from the perspective of those elite funds.

Is Neurocrine Biosciences, Inc. (NASDAQ:NBIX) going to take off soon? Prominent investors are becoming less confident. The number of bullish hedge fund positions went down by 2 in recent months. Our calculations also showed that NBIX isn’t among the 30 most popular stocks among hedge funds. NBIX was in 37 hedge funds’ portfolios at the end of December. There were 39 hedge funds in our database with NBIX positions at the end of the previous quarter.

What does the smart money think about Neurocrine Biosciences, Inc. (NASDAQ:NBIX)?

At the end of the fourth quarter, a total of 37 of the hedge funds tracked by Insider Monkey held long positions in this stock, a change of -5% from the second quarter of 2018. Below, you can check out the change in hedge fund sentiment towards NBIX over the last 14 quarters. So, let’s examine which hedge funds were among the top holders of the stock and which hedge funds were making big moves. 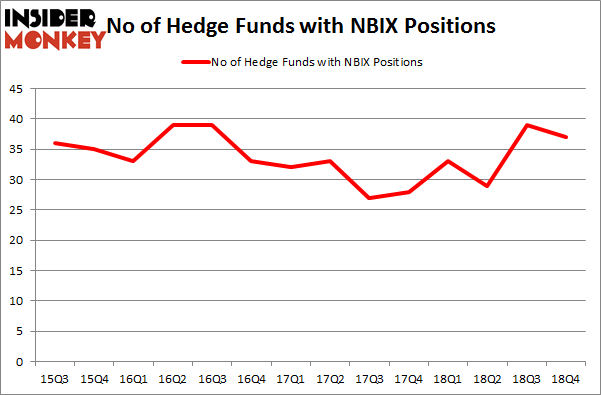 More specifically, Perceptive Advisors was the largest shareholder of Neurocrine Biosciences, Inc. (NASDAQ:NBIX), with a stake worth $315.4 million reported as of the end of September. Trailing Perceptive Advisors was Healthcor Management LP, which amassed a stake valued at $78 million. Rock Springs Capital Management, Marshall Wace LLP, and Two Sigma Advisors were also very fond of the stock, giving the stock large weights in their portfolios.

Seeing as Neurocrine Biosciences, Inc. (NASDAQ:NBIX) has witnessed declining sentiment from the entirety of the hedge funds we track, it’s safe to say that there was a specific group of hedgies that slashed their positions entirely last quarter. At the top of the heap, Ken Griffin’s Citadel Investment Group said goodbye to the largest investment of the 700 funds monitored by Insider Monkey, comprising about $54 million in stock. Brian Ashford-Russell and Tim Woolley’s fund, Polar Capital, also sold off its stock, about $32.6 million worth. These transactions are interesting, as aggregate hedge fund interest was cut by 2 funds last quarter.

As you can see these stocks had an average of 19 hedge funds with bullish positions and the average amount invested in these stocks was $553 million. That figure was $782 million in NBIX’s case. Bausch Health Companies (NYSE:BHC) is the most popular stock in this table. On the other hand AMERCO (NASDAQ:UHAL) is the least popular one with only 7 bullish hedge fund positions. Compared to these stocks Neurocrine Biosciences, Inc. (NASDAQ:NBIX) is more popular among hedge funds. Considering that hedge funds are fond of this stock in relation to its market cap peers, it may be a good idea to analyze it in detail and potentially include it in your portfolio. Our calculations showed that top 15 most popular stocks among hedge funds returned 21.3% through April 8th and outperformed the S&P 500 ETF (SPY) by more than 5 percentage points. Hedge funds were also right about betting on NBIX as the stock returned 27.8% and outperformed the market as well.