How do we determine whether Methode Electronics Inc. (NYSE:MEI) makes for a good investment at the moment? We analyze the sentiment of a select group of the very best investors in the world, who spend immense amounts of time and resources studying companies. They may not always be right (no one is), but data shows that their consensus long positions have historically outperformed the market when we adjust for known risk factors.

Methode Electronics Inc. (NYSE:MEI) was in 8 hedge funds’ portfolios at the end of June. MEI investors should pay attention to a decrease in support from the world’s most elite money managers of late. There were 10 hedge funds in our database with MEI holdings at the end of the previous quarter. Our calculations also showed that MEI isn’t among the 30 most popular stocks among hedge funds (see the video below). 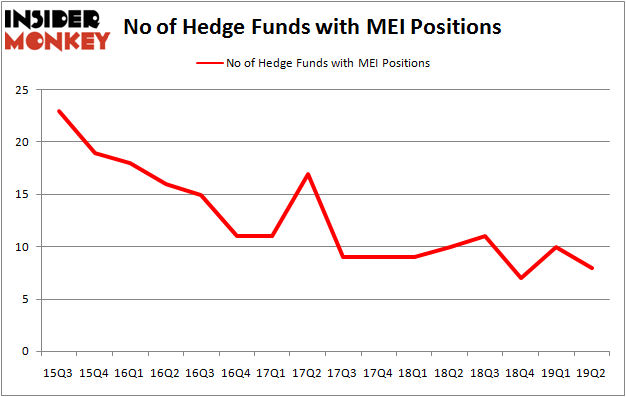 What does smart money think about Methode Electronics Inc. (NYSE:MEI)?

At the end of the second quarter, a total of 8 of the hedge funds tracked by Insider Monkey were bullish on this stock, a change of -20% from the first quarter of 2019. Below, you can check out the change in hedge fund sentiment towards MEI over the last 16 quarters. With the smart money’s sentiment swirling, there exists a few key hedge fund managers who were increasing their stakes considerably (or already accumulated large positions).

Of the funds tracked by Insider Monkey, Ariel Investments, managed by John W. Rogers, holds the biggest position in Methode Electronics Inc. (NYSE:MEI). Ariel Investments has a $26 million position in the stock, comprising 0.3% of its 13F portfolio. Coming in second is Renaissance Technologies, with a $23.3 million position; less than 0.1%% of its 13F portfolio is allocated to the company. Some other peers that hold long positions consist of Chuck Royce’s Royce & Associates, Israel Englander’s Millennium Management and Ken Griffin’s Citadel Investment Group.

Since Methode Electronics Inc. (NYSE:MEI) has faced falling interest from the entirety of the hedge funds we track, it’s easy to see that there exists a select few fund managers that elected to cut their full holdings in the second quarter. Interestingly, David Harding’s Winton Capital Management dumped the biggest stake of the 750 funds tracked by Insider Monkey, totaling an estimated $0.6 million in stock, and Gavin Saitowitz and Cisco J. del Valle’s Springbok Capital was right behind this move, as the fund dumped about $0.4 million worth. These moves are interesting, as aggregate hedge fund interest was cut by 2 funds in the second quarter.

As you can see these stocks had an average of 16.75 hedge funds with bullish positions and the average amount invested in these stocks was $142 million. That figure was $87 million in MEI’s case. Abercrombie & Fitch Co. (NYSE:ANF) is the most popular stock in this table. On the other hand Camping World Holdings, Inc. (NYSE:CWH) is the least popular one with only 9 bullish hedge fund positions. Compared to these stocks Methode Electronics Inc. (NYSE:MEI) is even less popular than CWH. Hedge funds clearly dropped the ball on MEI as the stock delivered strong returns, though hedge funds’ consensus picks still generated respectable returns. Our calculations showed that top 20 most popular stocks among hedge funds returned 24.4% in 2019 through September 30th and outperformed the S&P 500 ETF (SPY) by 4 percentage points. A small number of hedge funds were also right about betting on MEI as the stock returned 18.2% during the third quarter and outperformed the market by an even larger margin.