Did Hedge Funds Drop The Ball On Meritor Inc (MTOR) ?

The Insider Monkey team has completed processing the quarterly 13F filings for the September quarter submitted by the hedge funds and other money managers included in our extensive database. Most hedge fund investors experienced strong gains on the back of a strong market performance, which certainly propelled them to adjust their equity holdings so as to maintain the desired risk profile. As a result, the relevancy of these public filings and their content is indisputable, as they may reveal numerous high-potential stocks. The following article will discuss the smart money sentiment towards Meritor Inc (NYSE:MTOR).

Hedge fund interest in Meritor Inc (NYSE:MTOR) shares was flat at the end of last quarter. This is usually a negative indicator. The level and the change in hedge fund popularity aren’t the only variables you need to analyze to decipher hedge funds’ perspectives. A stock may witness a boost in popularity but it may still be less popular than similarly priced stocks. That’s why at the end of this article we will examine companies such as Apellis Pharmaceuticals, Inc. (NASDAQ:APLS), Easterly Government Properties Inc (NYSE:DEA), and Archrock, Inc. (NYSE:AROC) to gather more data points. Our calculations also showed that MTOR isn’t among the 30 most popular stocks among hedge funds (click for Q3 rankings and see the video below for Q2 rankings).

Unlike the largest US hedge funds that are convinced Dow will soar past 40,000 or the world’s most bearish hedge fund that’s more convinced than ever that a crash is coming, our long-short investment strategy doesn’t rely on bull or bear markets to deliver double digit returns. We only rely on the best performing hedge funds‘ buy/sell signals. We’re going to take a look at the recent hedge fund action surrounding Meritor Inc (NYSE:MTOR). 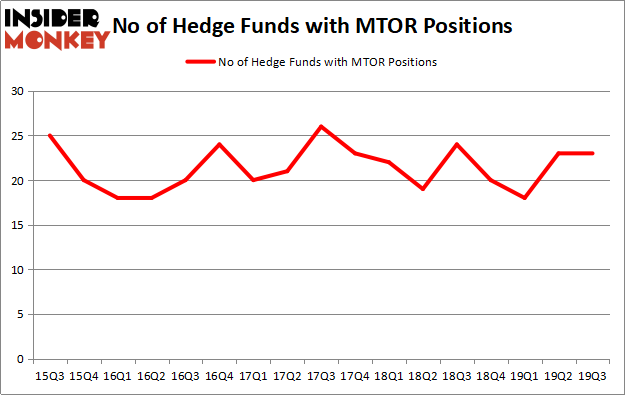 Of the funds tracked by Insider Monkey, Glenview Capital, managed by Larry Robbins, holds the largest position in Meritor Inc (NYSE:MTOR). Glenview Capital has a $133.3 million position in the stock, comprising 1.4% of its 13F portfolio. The second most bullish fund manager is Royce & Associates, managed by Chuck Royce, which holds a $32.7 million position; 0.3% of its 13F portfolio is allocated to the stock. Some other peers that are bullish include Peter Rathjens, Bruce Clarke and John Campbell’s Arrowstreet Capital, Jacob Doft’s Highline Capital Management and Ken Griffin’s Citadel Investment Group. In terms of the portfolio weights assigned to each position Highline Capital Management allocated the biggest weight to Meritor Inc (NYSE:MTOR), around 3.39% of its 13F portfolio. Glenview Capital is also relatively very bullish on the stock, dishing out 1.4 percent of its 13F equity portfolio to MTOR.

Judging by the fact that Meritor Inc (NYSE:MTOR) has faced declining sentiment from the entirety of the hedge funds we track, logic holds that there lies a certain “tier” of funds that elected to cut their positions entirely heading into Q4. It’s worth mentioning that Gregg Moskowitz’s Interval Partners dumped the biggest stake of the “upper crust” of funds watched by Insider Monkey, totaling close to $3.9 million in stock, and Thomas Bailard’s Bailard Inc was right behind this move, as the fund dumped about $2.5 million worth. These bearish behaviors are intriguing to say the least, as aggregate hedge fund interest stayed the same (this is a bearish signal in our experience).

As you can see these stocks had an average of 14 hedge funds with bullish positions and the average amount invested in these stocks was $156 million. That figure was $263 million in MTOR’s case. Apellis Pharmaceuticals, Inc. (NASDAQ:APLS) is the most popular stock in this table. On the other hand Easterly Government Properties Inc (NYSE:DEA) is the least popular one with only 9 bullish hedge fund positions. Meritor Inc (NYSE:MTOR) is not the most popular stock in this group but hedge fund interest is still above average. Our calculations showed that top 20 most popular stocks among hedge funds returned 37.4% in 2019 through the end of November and outperformed the S&P 500 ETF (SPY) by 9.9 percentage points. Hedge funds were also right about betting on MTOR as the stock returned 36.5% during the fourth quarter (through the end of November) and outperformed the market. Hedge funds were rewarded for their relative bullishness.