Is Knight-Swift Transportation Holdings Inc. (NYSE:KNX) a good equity to bet on right now? We like to check what the smart money thinks first before doing extensive research on a given stock. Although there have been several high profile failed hedge fund picks, the consensus picks among hedge fund investors have historically outperformed the market after adjusting for known risk attributes. It’s not surprising given that hedge funds have access to better information and more resources to predict the winners in the stock market.

Knight-Swift Transportation Holdings Inc. (NYSE:KNX) was in 23 hedge funds’ portfolios at the end of the second quarter of 2019. KNX shareholders have witnessed a decrease in enthusiasm from smart money in recent months. There were 33 hedge funds in our database with KNX positions at the end of the previous quarter. Our calculations also showed that KNX isn’t among the 30 most popular stocks among hedge funds.

Unlike some fund managers who are betting on Dow reaching 40000 in a year, our long-short investment strategy doesn’t rely on bull markets to deliver double digit returns. We only rely on hedge fund buy/sell signals. We’re going to go over the recent hedge fund action encompassing Knight-Swift Transportation Holdings Inc. (NYSE:KNX).

How have hedgies been trading Knight-Swift Transportation Holdings Inc. (NYSE:KNX)?

At the end of the second quarter, a total of 23 of the hedge funds tracked by Insider Monkey held long positions in this stock, a change of -30% from the first quarter of 2019. The graph below displays the number of hedge funds with bullish position in KNX over the last 16 quarters. With the smart money’s sentiment swirling, there exists an “upper tier” of notable hedge fund managers who were adding to their stakes meaningfully (or already accumulated large positions). 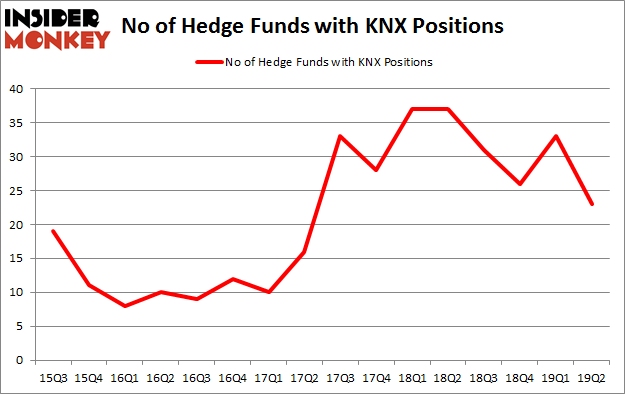 Seeing as Knight-Swift Transportation Holdings Inc. (NYSE:KNX) has witnessed declining sentiment from the smart money, it’s easy to see that there was a specific group of funds that slashed their full holdings last quarter. At the top of the heap, Peter S. Park’s Park West Asset Management dumped the largest stake of the “upper crust” of funds followed by Insider Monkey, comprising about $17.2 million in stock. Philip Hempleman’s fund, Ardsley Partners, also dumped its stock, about $8.3 million worth. These moves are interesting, as total hedge fund interest was cut by 10 funds last quarter.

As you can see these stocks had an average of 30.5 hedge funds with bullish positions and the average amount invested in these stocks was $591 million. That figure was $263 million in KNX’s case. Versum Materials, Inc. (NYSE:VSM) is the most popular stock in this table. On the other hand HUYA Inc. (NYSE:HUYA) is the least popular one with only 22 bullish hedge fund positions. Knight-Swift Transportation Holdings Inc. (NYSE:KNX) is not the least popular stock in this group but hedge fund interest is still below average. Our calculations showed that top 20 most popular stocks (view the video below) among hedge funds returned 24.4% in 2019 through September 30th and outperformed the S&P 500 ETF (SPY) by 4 percentage points. A small number of hedge funds were also right about betting on KNX as the stock returned 10.7% during the same time frame and outperformed the market by an even larger margin.