While the market driven by short-term sentiment influenced by the accomodative interest rate environment in the US, increasing oil prices and deteriorating expectations towards the resolution of the trade war with China, many smart money investors kept their cautious approach regarding the current bull run in the second quarter and hedging or reducing many of their long positions. Some fund managers like this one are betting on Dow hitting 40,000 to generate strong returns. However, as we know, big investors usually buy stocks with strong fundamentals that can deliver gains both in bull and bear markets, which is why we believe we can profit from imitating them. In this article, we are going to take a look at the smart money sentiment surrounding International Game Technology PLC (NYSE:IGT).

Is International Game Technology PLC (NYSE:IGT) an attractive investment right now? The smart money is getting less bullish. The number of long hedge fund positions retreated by 2 recently. Our calculations also showed that IGT isn’t among the 30 most popular stocks among hedge funds (view the video below). IGT was in 30 hedge funds’ portfolios at the end of June. There were 32 hedge funds in our database with IGT positions at the end of the previous quarter.

At the end of the second quarter, a total of 30 of the hedge funds tracked by Insider Monkey were bullish on this stock, a change of -6% from the first quarter of 2019. By comparison, 35 hedge funds held shares or bullish call options in IGT a year ago. With hedge funds’ positions undergoing their usual ebb and flow, there exists a few key hedge fund managers who were boosting their stakes considerably (or already accumulated large positions). 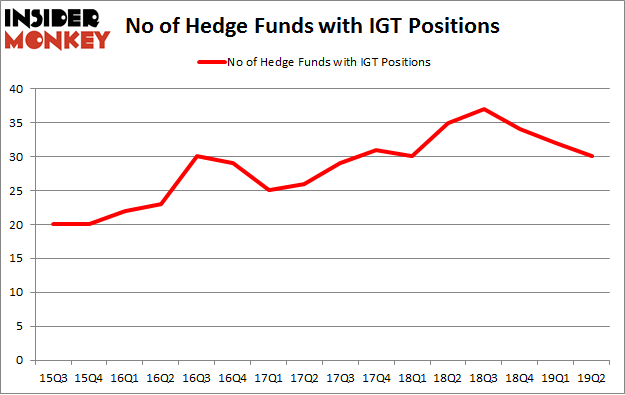 More specifically, Samlyn Capital was the largest shareholder of International Game Technology PLC (NYSE:IGT), with a stake worth $60.2 million reported as of the end of March. Trailing Samlyn Capital was HG Vora Capital Management, which amassed a stake valued at $48 million. BloombergSen, PAR Capital Management, and Renaissance Technologies were also very fond of the stock, giving the stock large weights in their portfolios.

Because International Game Technology PLC (NYSE:IGT) has faced a decline in interest from the smart money, it’s safe to say that there was a specific group of funds that decided to sell off their positions entirely heading into Q3. At the top of the heap, Gregg Moskowitz’s Interval Partners dumped the biggest stake of all the hedgies tracked by Insider Monkey, worth about $26 million in stock, and David Rosen’s Rubric Capital Management was right behind this move, as the fund said goodbye to about $24.3 million worth. These transactions are interesting, as total hedge fund interest was cut by 2 funds heading into Q3.

As you can see these stocks had an average of 6.75 hedge funds with bullish positions and the average amount invested in these stocks was $49 million. That figure was $280 million in IGT’s case. ABM Industries Incorporated (NYSE:ABM) is the most popular stock in this table. On the other hand Genesis Energy, L.P. (NYSE:GEL) is the least popular one with only 4 bullish hedge fund positions. Compared to these stocks International Game Technology PLC (NYSE:IGT) is more popular among hedge funds. Our calculations showed that top 20 most popular stocks among hedge funds returned 24.4% in 2019 through September 30th and outperformed the S&P 500 ETF (SPY) by 4 percentage points. Hedge funds were also right about betting on IGT as the stock returned 11.3% during Q3 and outperformed the market by an even larger margin. Hedge funds were clearly right about piling into this stock relative to other stocks with similar market capitalizations.