Did Hedge Funds Drop The Ball On InflaRx N.V. (IFRX)?

InflaRx N.V. (NASDAQ:IFRX) has seen a decrease in hedge fund interest in recent months. Our calculations also showed that IFRX isn’t among the 30 most popular stocks among hedge funds.

What does the smart money think about InflaRx N.V. (NASDAQ:IFRX)?

At the end of the fourth quarter, a total of 13 of the hedge funds tracked by Insider Monkey were long this stock, a change of -7% from the previous quarter. By comparison, 8 hedge funds held shares or bullish call options in IFRX a year ago. With the smart money’s sentiment swirling, there exists a select group of key hedge fund managers who were adding to their holdings meaningfully (or already accumulated large positions). 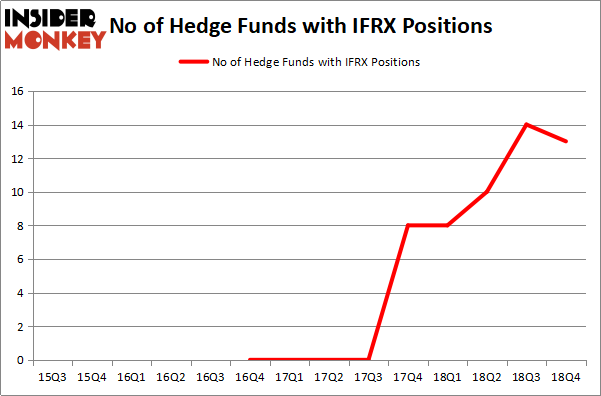 Judging by the fact that InflaRx N.V. (NASDAQ:IFRX) has experienced declining sentiment from the smart money, logic holds that there were a few funds that elected to cut their full holdings in the third quarter. Interestingly, Matt Sirovich and Jeremy Mindich’s Scopia Capital sold off the biggest position of the 700 funds monitored by Insider Monkey, comprising an estimated $7 million in stock, and Jim Simons’s Renaissance Technologies was right behind this move, as the fund cut about $0.7 million worth. These moves are important to note, as aggregate hedge fund interest dropped by 1 funds in the third quarter.

As you can see these stocks had an average of 14.75 hedge funds with bullish positions and the average amount invested in these stocks was $145 million. That figure was $327 million in IFRX’s case. Constellium NV (NYSE:CSTM) is the most popular stock in this table. On the other hand Chase Corporation (NYSEAMEX:CCF) is the least popular one with only 5 bullish hedge fund positions. InflaRx N.V. (NASDAQ:IFRX) is not the least popular stock in this group but hedge fund interest is still below average. Our calculations showed that top 15 most popular stocks) among hedge funds returned 24.2% through April 22nd and outperformed the S&P 500 ETF (SPY) by more than 7 percentage points. A small number of hedge funds were also right about betting on IFRX as the stock returned 41% and outperformed the market by an even larger margin.