Did Hedge Funds Drop The Ball On Incyte Corporation (INCY) ?

Many investors, including Paul Tudor Jones or Stan Druckenmiller, have been saying before the Q4 market crash that the stock market is overvalued due to a low interest rate environment that leads to companies swapping their equity for debt and focusing mostly on short-term performance such as beating the quarterly earnings estimates. In the fourth quarter, many investors lost money due to unpredictable events such as the sudden increase in long-term interest rates and unintended consequences of the trade war with China. Nevertheless, many of the stocks that tanked in the fourth quarter still sport strong fundamentals and their decline was more related to the general market sentiment rather than their individual performance and hedge funds kept their bullish stance. In this article we will find out how hedge fund sentiment to Incyte Corporation (NASDAQ:INCY) changed recently.

Incyte Corporation (NASDAQ:INCY) has seen a decrease in activity from the world’s largest hedge funds of late. Our calculations also showed that INCY isn’t among the 30 most popular stocks among hedge funds.

We’re going to take a look at the key hedge fund action regarding Incyte Corporation (NASDAQ:INCY). 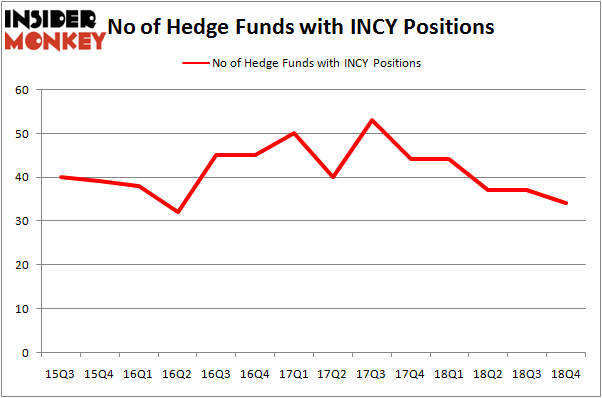 Among these funds, Baker Bros. Advisors held the most valuable stake in Incyte Corporation (NASDAQ:INCY), which was worth $2178.1 million at the end of the third quarter. On the second spot was Matrix Capital Management which amassed $255.4 million worth of shares. Moreover, Citadel Investment Group, D E Shaw, and Two Sigma Advisors were also bullish on Incyte Corporation (NASDAQ:INCY), allocating a large percentage of their portfolios to this stock.

Since Incyte Corporation (NASDAQ:INCY) has faced bearish sentiment from the smart money, we can see that there lies a certain “tier” of hedge funds who were dropping their entire stakes heading into Q3. Interestingly, Steven Boyd’s Armistice Capital cut the largest position of the “upper crust” of funds monitored by Insider Monkey, valued at close to $48.4 million in stock. Anand Parekh’s fund, Alyeska Investment Group, also said goodbye to its stock, about $10.4 million worth. These moves are interesting, as aggregate hedge fund interest fell by 3 funds heading into Q3.

As you can see these stocks had an average of 28.75 hedge funds with bullish positions and the average amount invested in these stocks was $780 million. That figure was $3043 million in INCY’s case. Cardinal Health, Inc. (NYSE:CAH) is the most popular stock in this table. On the other hand Nasdaq, Inc. (NASDAQ:NDAQ) is the least popular one with only 21 bullish hedge fund positions. Incyte Corporation (NASDAQ:INCY) is not the most popular stock in this group but hedge fund interest is still above average. This is a slightly positive signal but we’d rather spend our time researching stocks that hedge funds are piling on. Our calculations showed that top 15 most popular stocks among hedge funds returned 19.7% through March 15th and outperformed the S&P 500 ETF (SPY) by 6.6 percentage points. A handful of hedge funds were also right about betting on INCY as the stock returned 33.4% and outperformed the market as well.

Did Hedge Funds Drop The Ball On Markel Corporation (MKL) ?
Monthly Newsletter Strategy
Download a free copy of our newsletter and see the details inside!
Hedge Fund Resource Center
Related News
Is Incyte Corporation (INCY) A Good Stock To Buy? Insider Buying Roundup: Elon Musk Buys Tesla (TSLA) Shares After Earnings Call Backlash Wondering What’s Happening in the Financial Markets Today? Take a Look at These 34 Stories! What’s Going On In The Finance World Today? Why Incyte Corporation (INCY) is in the Spotlight 11 Fastest Growing S&P 500 Companies in America Does Incyte Corporation (INCY) Represent a Good Addition to Your Portfolio? Hedge Funds Have Never Been This Bullish On Visa Inc (V) Ten of the Most Common Addictions 13 African Countries with the Largest White Population in 2018
Billionaire Hedge Funds