During the fourth quarter the Russell 2000 ETF (IWM) lagged the larger S&P 500 ETF (SPY) by nearly 7 percentage points as investors worried over the possible ramifications of rising interest rates. The hedge funds and institutional investors we track typically invest more in smaller-cap stocks than an average investor (i.e. only 298 S&P 500 constituents were among the 500 most popular stocks among hedge funds), and we have seen data that shows those funds paring back their overall exposure. Those funds cutting positions in small-caps is one reason why volatility has increased. In the following paragraphs, we take a closer look at what hedge funds and prominent investors think of Guidewire Software Inc (NYSE:GWRE) and see how the stock is affected by the recent hedge fund activity.

Guidewire Software Inc (NYSE:GWRE) was in 20 hedge funds’ portfolios at the end of the fourth quarter of 2018. GWRE shareholders have witnessed a decrease in hedge fund sentiment lately. There were 32 hedge funds in our database with GWRE positions at the end of the previous quarter. Our calculations also showed that GWRE isn’t among the 30 most popular stocks among hedge funds.

What does the smart money think about Guidewire Software Inc (NYSE:GWRE)? 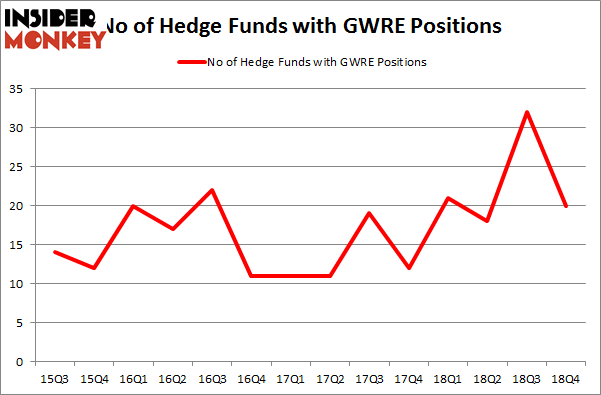 Among these funds, D1 Capital Partners held the most valuable stake in Guidewire Software Inc (NYSE:GWRE), which was worth $238.3 million at the end of the third quarter. On the second spot was Stockbridge Partners which amassed $164.9 million worth of shares. Moreover, Renaissance Technologies, Bares Capital Management, and Shannon River Fund Management were also bullish on Guidewire Software Inc (NYSE:GWRE), allocating a large percentage of their portfolios to this stock.

Due to the fact that Guidewire Software Inc (NYSE:GWRE) has faced a decline in interest from the entirety of the hedge funds we track, we can see that there was a specific group of money managers that decided to sell off their full holdings last quarter. At the top of the heap, Zach Schreiber’s Point State Capital cut the biggest position of the 700 funds tracked by Insider Monkey, worth an estimated $82.1 million in stock, and Christopher James’s Partner Fund Management was right behind this move, as the fund said goodbye to about $41.3 million worth. These bearish behaviors are intriguing to say the least, as total hedge fund interest was cut by 12 funds last quarter.

As you can see these stocks had an average of 26.5 hedge funds with bullish positions and the average amount invested in these stocks was $661 million. That figure was $565 million in GWRE’s case. Neurocrine Biosciences, Inc. (NASDAQ:NBIX) is the most popular stock in this table. On the other hand Bright Horizons Family Solutions Inc (NYSE:BFAM) is the least popular one with only 16 bullish hedge fund positions. Guidewire Software Inc (NYSE:GWRE) is not the least popular stock in this group but hedge fund interest is still below average. This is a slightly negative signal and we’d rather spend our time researching stocks that hedge funds are piling on. Our calculations showed that top 15 most popular stocks among hedge funds returned 21.3% through April 8th and outperformed the S&P 500 ETF (SPY) by more than 5 percentage points. Hedge funds were also right about betting on GWRE as the stock returned 24.8% and outperformed the market as well.