Is GTT Communications Inc (NYSE:GTT) a good equity to bet on right now? We like to check what the smart money thinks first before doing extensive research. Although there have been several high profile failed hedge fund picks, the consensus picks among hedge fund investors have historically outperformed the market after adjusting for known risk attributes. It’s not surprising given that hedge funds have access to better information and more resources to find the winners in the stock market.

GTT Communications Inc (NYSE:GTT) shareholders have witnessed an increase in activity from the world’s largest hedge funds lately. GTT was in 15 hedge funds’ portfolios at the end of December. There were 14 hedge funds in our database with GTT positions at the end of the previous quarter. Our calculations also showed that GTT isn’t among the 30 most popular stocks among hedge funds. 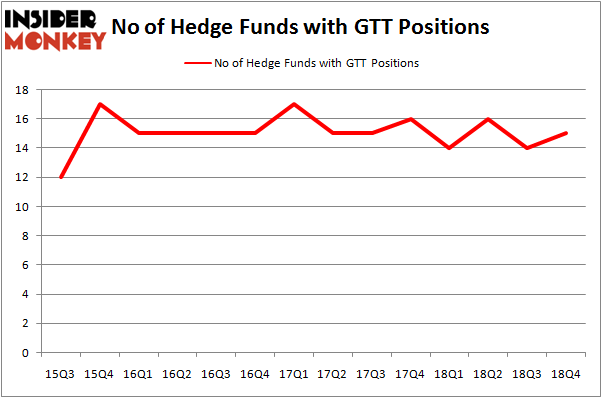 When looking at the institutional investors followed by Insider Monkey, Spruce House Investment Management, managed by Zachary Sternberg and Benjamin Stein, holds the most valuable position in GTT Communications Inc (NYSE:GTT). Spruce House Investment Management has a $257.9 million position in the stock, comprising 11.9% of its 13F portfolio. The second most bullish fund manager is MFN Partners, led by Farhad Nanji and Michael DeMichele, holding a $23.7 million position; the fund has 4% of its 13F portfolio invested in the stock. Other members of the smart money that hold long positions consist of Wilmot B. Harkey and Daniel Mack’s Nantahala Capital Management, Jeffrey Bronchick’s Cove Street Capital and Joe DiMenna’s ZWEIG DIMENNA PARTNERS.

Consequently, key money managers have jumped into GTT Communications Inc (NYSE:GTT) headfirst. MFN Partners, managed by Farhad Nanji and Michael DeMichele, established the most valuable position in GTT Communications Inc (NYSE:GTT). MFN Partners had $23.7 million invested in the company at the end of the quarter. Eric Bannasch’s Cadian Capital also made a $2.2 million investment in the stock during the quarter. The other funds with new positions in the stock are Ken Griffin’s Citadel Investment Group, Daniel S. Och’s OZ Management, and Israel Englander’s Millennium Management.

As you can see these stocks had an average of 13.5 hedge funds with bullish positions and the average amount invested in these stocks was $126 million. That figure was $350 million in GTT’s case. NutriSystem Inc. (NASDAQ:NTRI) is the most popular stock in this table. On the other hand Hailiang Education Group Inc. (NASDAQ:HLG) is the least popular one with only 3 bullish hedge fund positions. GTT Communications Inc (NYSE:GTT) is not the most popular stock in this group but hedge fund interest is still above average. Our calculations showed that top 15 most popular stocks) among hedge funds returned 24.2% through April 22nd and outperformed the S&P 500 ETF (SPY) by more than 7 percentage points. Hedge funds were also right about betting on GTT as the stock returned 71.6% and outperformed the market by an even larger margin. Hedge funds were rewarded for their relative bullishness.