Gannett Co., Inc. (NYSE:GCI) has experienced a decrease in hedge fund sentiment lately. GCI was in 14 hedge funds’ portfolios at the end of the second quarter of 2019. There were 16 hedge funds in our database with GCI holdings at the end of the previous quarter. Our calculations also showed that GCI isn’t among the 30 most popular stocks among hedge funds (see the video below).

At the end of the second quarter, a total of 14 of the hedge funds tracked by Insider Monkey were bullish on this stock, a change of -13% from one quarter earlier. By comparison, 19 hedge funds held shares or bullish call options in GCI a year ago. With hedgies’ capital changing hands, there exists an “upper tier” of key hedge fund managers who were boosting their stakes meaningfully (or already accumulated large positions). 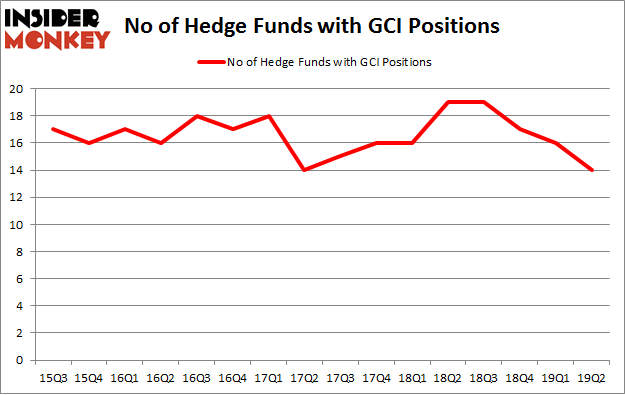 The largest stake in Gannett Co., Inc. (NYSE:GCI) was held by HG Vora Capital Management, which reported holding $64.1 million worth of stock at the end of March. It was followed by Alden Global Capital with a $35.2 million position. Other investors bullish on the company included Alta Fundamental Advisers, Two Sigma Advisors, and Royce & Associates.

Judging by the fact that Gannett Co., Inc. (NYSE:GCI) has experienced declining sentiment from hedge fund managers, it’s safe to say that there exists a select few hedgies that slashed their positions entirely heading into Q3. At the top of the heap, Peter Rathjens, Bruce Clarke and John Campbell’s Arrowstreet Capital cut the biggest stake of the 750 funds watched by Insider Monkey, totaling close to $7.8 million in call options. Steve Pigott’s fund, Fort Baker Capital Management, also dropped its call options, about $2.7 million worth. These transactions are interesting, as aggregate hedge fund interest fell by 2 funds heading into Q3.

As you can see these stocks had an average of 8.75 hedge funds with bullish positions and the average amount invested in these stocks was $189 million. That figure was $121 million in GCI’s case. Standex International Corporation (NYSE:SXI) is the most popular stock in this table. On the other hand TCG BDC, Inc. (NASDAQ:CGBD) is the least popular one with only 8 bullish hedge fund positions. Compared to these stocks Gannett Co., Inc. (NYSE:GCI) is more popular among hedge funds. Our calculations showed that top 20 most popular stocks among hedge funds returned 24.4% in 2019 through September 30th and outperformed the S&P 500 ETF (SPY) by 4 percentage points. Hedge funds were also right about betting on GCI as the stock returned 33.6% during Q3 and outperformed the market by an even larger margin. Hedge funds were clearly right about piling into this stock relative to other stocks with similar market capitalizations.