Did Hedge Funds Drop The Ball On Exelixis, Inc. (EXEL) ?

Does Exelixis, Inc. (NASDAQ:EXEL) represent a good buying opportunity at the moment? Let’s briefly check the hedge fund interest towards the company. Hedge fund firms constantly search out bright intellectuals and highly-experienced employees and throw away millions of dollars on satellite photos and other research activities, so it is no wonder why they tend to generate millions in profits each year. It is also true that some hedge fund players fail inconceivably on some occasions, but net net their stock picks have been generating superior risk-adjusted returns on average over the years.

Is Exelixis, Inc. (NASDAQ:EXEL) the right investment to pursue these days? Money managers are becoming more confident. The number of bullish hedge fund positions increased by 1 recently. Our calculations also showed that EXEL isn’t among the 30 most popular stocks among hedge funds. 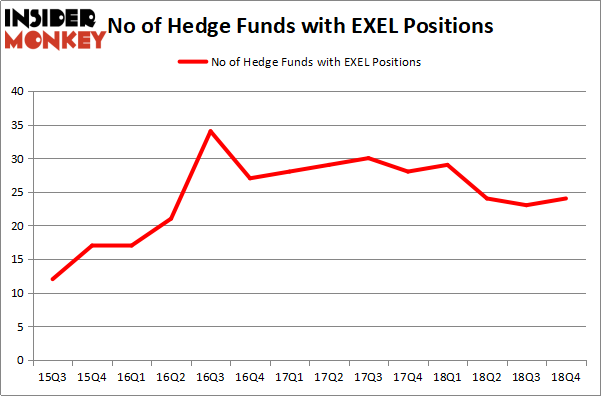 As aggregate interest increased, key money managers have been driving this bullishness. Samlyn Capital, managed by Robert Pohly, established the most valuable position in Exelixis, Inc. (NASDAQ:EXEL). Samlyn Capital had $15.8 million invested in the company at the end of the quarter. Louis Bacon’s Moore Global Investments also made a $3.1 million investment in the stock during the quarter. The other funds with new positions in the stock are George Zweig, Shane Haas and Ravi Chander’s Signition LP, John Overdeck and David Siegel’s Two Sigma Advisors, and Michael Gelband’s ExodusPoint Capital.

As you can see these stocks had an average of 14.75 hedge funds with bullish positions and the average amount invested in these stocks was $236 million. That figure was $668 million in EXEL’s case. World Wrestling Entertainment, Inc. (NYSE:WWE) is the most popular stock in this table. On the other hand Enable Midstream Partners LP (NYSE:ENBL) is the least popular one with only 4 bullish hedge fund positions. Exelixis, Inc. (NASDAQ:EXEL) is not the most popular stock in this group but hedge fund interest is still above average. This is a slightly positive signal but we’d rather spend our time researching stocks that hedge funds are piling on. Our calculations showed that top 15 most popular stocks among hedge funds returned 21.3% through April 8th and outperformed the S&P 500 ETF (SPY) by more than 5 percentage points. Hedge funds were also right about betting on EXEL as the stock returned 24.3% and outperformed the market as well.