Did Hedge Funds Drop The Ball On Dril-Quip, Inc. (DRQ)?

It was a rough fourth quarter for many hedge funds, which were naturally unable to overcome the big dip in the broad market, as the S&P 500 fell by about 4.8% during 2018 and average hedge fund losing about 1%. The Russell 2000, composed of smaller companies, performed even worse, trailing the S&P by more than 6 percentage points, as investors fled less-known quantities for safe havens. This was the case with hedge funds, who we heard were pulling money from the market amid the volatility, which included money from small-cap stocks, which they invest in at a higher rate than other investors. This action contributed to the greater decline in these stocks during the tumultuous period. We will study how this market volatility affected their sentiment towards Dril-Quip, Inc. (NYSE:DRQ) during the quarter below.

Dril-Quip, Inc. (NYSE:DRQ) investors should pay attention to an increase in enthusiasm from smart money in recent months. DRQ was in 19 hedge funds’ portfolios at the end of the fourth quarter of 2018. There were 18 hedge funds in our database with DRQ holdings at the end of the previous quarter. Our calculations also showed that DRQ isn’t among the 30 most popular stocks among hedge funds.

To most stock holders, hedge funds are viewed as worthless, old financial tools of the past. While there are more than 8000 funds in operation at present, We choose to focus on the masters of this club, around 750 funds. Most estimates calculate that this group of people manage the majority of the smart money’s total asset base, and by observing their top stock picks, Insider Monkey has unsheathed a few investment strategies that have historically outpaced Mr. Market. Insider Monkey’s flagship hedge fund strategy exceeded the S&P 500 index by nearly 5 percentage points per annum since its inception in May 2014 through early November 2018. We were able to generate large returns even by identifying short candidates. Our portfolio of short stocks lost 27.5% since February 2017 (through March 12th) even though the market was up nearly 25% during the same period. We just shared a list of 6 short targets in our latest quarterly update and they are already down an average of 6% in less than a month.

What have hedge funds been doing with Dril-Quip, Inc. (NYSE:DRQ)? 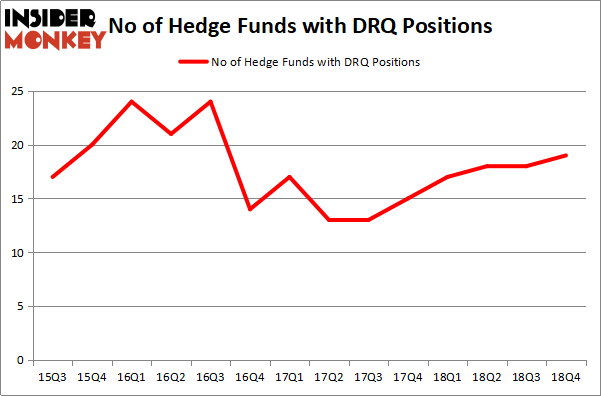 Among these funds, Fisher Asset Management held the most valuable stake in Dril-Quip, Inc. (NYSE:DRQ), which was worth $51 million at the end of the fourth quarter. On the second spot was GAMCO Investors which amassed $18.6 million worth of shares. Moreover, Renaissance Technologies, Millennium Management, and TVR Capital were also bullish on Dril-Quip, Inc. (NYSE:DRQ), allocating a large percentage of their portfolios to this stock.

As one would reasonably expect, some big names were breaking ground themselves. TVR Capital, managed by Thiru Ramakrishnan, established the biggest position in Dril-Quip, Inc. (NYSE:DRQ). TVR Capital had $6.3 million invested in the company at the end of the quarter. Sara Nainzadeh’s Centenus Global Management also initiated a $3 million position during the quarter. The other funds with new positions in the stock are Brandon Haley’s Holocene Advisors, Anand Parekh’s Alyeska Investment Group, and Andrew Feldstein and Stephen Siderow’s Blue Mountain Capital.

As you can see these stocks had an average of 11.5 hedge funds with bullish positions and the average amount invested in these stocks was $96 million. That figure was $127 million in DRQ’s case. Uniqure NV (NASDAQ:QURE) is the most popular stock in this table. On the other hand Presidio, Inc. (NASDAQ:PSDO) is the least popular one with only 6 bullish hedge fund positions. Compared to these stocks Dril-Quip, Inc. (NYSE:DRQ) is more popular among hedge funds. Our calculations showed that top 15 most popular stocks) among hedge funds returned 24.2% through April 22nd and outperformed the S&P 500 ETF (SPY) by more than 7 percentage points. Hedge funds were also right about betting on DRQ as the stock returned 54% and outperformed the market by an even larger margin. Hedge funds were clearly right about piling into this stock relative to other stocks with similar market capitalizations.