Did Hedge Funds Drop The Ball On Cimpress NV (CMPR) ?

We can judge whether Cimpress NV (NASDAQ:CMPR) is a good investment right now by following the lead of some of the best investors in the world and piggybacking their ideas. There’s no better way to get these firms’ immense resources and analytical capabilities working for us than to follow their lead into their best ideas. While not all of these picks will be winners, our research shows that these picks historically outperformed the market when we factor in known risk factors.

Is Cimpress NV (NASDAQ:CMPR) the right investment to pursue these days? Prominent investors are reducing their bets on the stock. The number of long hedge fund positions decreased by 7 in recent months. Our calculations also showed that cmpr isn’t among the 30 most popular stocks among hedge funds. CMPR was in 11 hedge funds’ portfolios at the end of the first quarter of 2019. There were 18 hedge funds in our database with CMPR positions at the end of the previous quarter.

How have hedgies been trading Cimpress NV (NASDAQ:CMPR)?

Heading into the second quarter of 2019, a total of 11 of the hedge funds tracked by Insider Monkey held long positions in this stock, a change of -39% from one quarter earlier. By comparison, 18 hedge funds held shares or bullish call options in CMPR a year ago. With hedgies’ positions undergoing their usual ebb and flow, there exists a select group of key hedge fund managers who were boosting their holdings substantially (or already accumulated large positions). 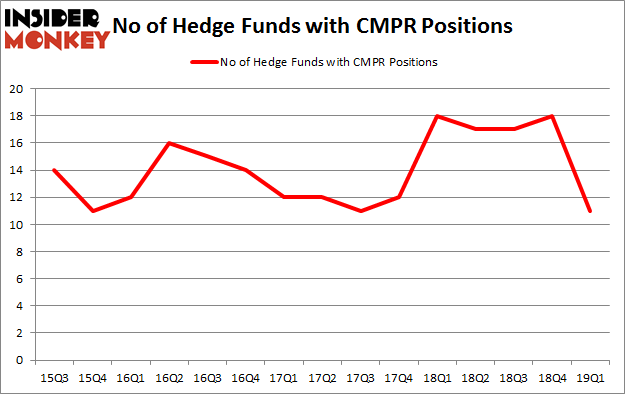 More specifically, Spruce House Investment Management was the largest shareholder of Cimpress NV (NASDAQ:CMPR), with a stake worth $189 million reported as of the end of March. Trailing Spruce House Investment Management was Arlington Value Capital, which amassed a stake valued at $168.1 million. Bares Capital Management, D E Shaw, and Diamond Hill Capital were also very fond of the stock, giving the stock large weights in their portfolios.

Due to the fact that Cimpress NV (NASDAQ:CMPR) has faced falling interest from hedge fund managers, logic holds that there lies a certain “tier” of fund managers that decided to sell off their full holdings last quarter. Intriguingly, William von Mueffling’s Cantillon Capital Management cut the largest position of all the hedgies watched by Insider Monkey, valued at an estimated $124.2 million in stock. Clifford A. Sosin’s fund, CAS Investment Partners, also dumped its stock, about $18.9 million worth. These moves are intriguing to say the least, as aggregate hedge fund interest was cut by 7 funds last quarter.

As you can see these stocks had an average of 14.5 hedge funds with bullish positions and the average amount invested in these stocks was $178 million. That figure was $428 million in CMPR’s case. Everbridge, Inc. (NASDAQ:EVBG) is the most popular stock in this table. On the other hand Focus Financial Partners Inc. (NASDAQ:FOCS) is the least popular one with only 5 bullish hedge fund positions. Cimpress NV (NASDAQ:CMPR) is not the least popular stock in this group but hedge fund interest is still below average. Our calculations showed that top 20 most popular stocks among hedge funds returned 6.2% in Q2 through June 19th and outperformed the S&P 500 ETF (SPY) by nearly 3 percentage points. A small number of hedge funds were also right about betting on CMPR as the stock returned 22.4% during the same time frame and outperformed the market by an even larger margin.