Does Cimpress NV (NASDAQ:CMPR) represent a good buying opportunity at the moment? Let’s briefly check the hedge fund interest towards the company. Hedge fund firms constantly search out bright intellectuals and highly-experienced employees and throw away millions of dollars on satellite photos and other research activities, so it is no wonder why they tend to generate millions in profits each year. It is also true that some hedge fund players fail inconceivably on some occasions, but net net their stock picks have been generating superior risk-adjusted returns on average over the years.

Cimpress NV (NASDAQ:CMPR) investors should pay attention to an increase in activity from the world’s largest hedge funds recently. CMPR was in 18 hedge funds’ portfolios at the end of the fourth quarter of 2018. There were 17 hedge funds in our database with CMPR holdings at the end of the previous quarter. Our calculations also showed that cmpr isn’t among the 30 most popular stocks among hedge funds.

To the average investor there are dozens of metrics stock market investors have at their disposal to assess publicly traded companies. A pair of the most innovative metrics are hedge fund and insider trading interest. We have shown that, historically, those who follow the best picks of the top hedge fund managers can outperform the market by a solid amount (see the details here).

What have hedge funds been doing with Cimpress NV (NASDAQ:CMPR)? 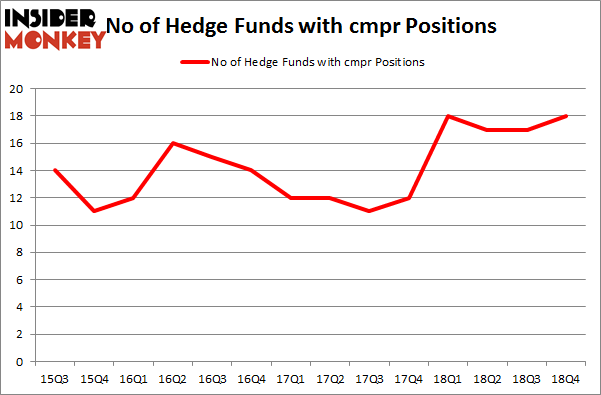 The largest stake in Cimpress NV (NASDAQ:CMPR) was held by Spruce House Investment Management, which reported holding $244 million worth of stock at the end of September. It was followed by Arlington Value Capital with a $162.4 million position. Other investors bullish on the company included Cantillon Capital Management, D E Shaw, and CAS Investment Partners.

With a general bullishness amongst the heavyweights, key hedge funds have jumped into Cimpress NV (NASDAQ:CMPR) headfirst. StackLine Partners, managed by Brian Gootzeit and Andrew Frank, established the largest position in Cimpress NV (NASDAQ:CMPR). StackLine Partners had $7.5 million invested in the company at the end of the quarter. Sims Lansing’s Lansing Management also initiated a $6.4 million position during the quarter. The other funds with brand new CMPR positions are Hoon Kim’s Quantinno Capital and Matthew Hulsizer’s PEAK6 Capital Management.

As you can see these stocks had an average of 22.5 hedge funds with bullish positions and the average amount invested in these stocks was $229 million. That figure was $617 million in CMPR’s case. MasTec, Inc. (NYSE:MTZ) is the most popular stock in this table. On the other hand National Health Investors Inc (NYSE:NHI) is the least popular one with only 13 bullish hedge fund positions. Cimpress NV (NASDAQ:CMPR) is not the least popular stock in this group but hedge fund interest is still below average. This is a slightly negative signal and we’d rather spend our time researching stocks that hedge funds are piling on. Our calculations showed that top 15 most popular stocks) among hedge funds returned 24.2% through April 22nd and outperformed the S&P 500 ETF (SPY) by more than 7 percentage points. Unfortunately CMPR wasn’t nearly as popular as these 15 stock (hedge fund sentiment was quite bearish); CMPR investors were disappointed as the stock returned -14.9% and underperformed the market. If you are interested in investing in large cap stocks with huge upside potential, you should check out the top 15 most popular stocks) among hedge funds as 13 of these stocks already outperformed the market this year.