Is Cimpress NV (CMPR) A Good Stock To Buy?

We at Insider Monkey have gone over 700 13F filings that hedge funds and prominent investors are required to file by the SEC. The 13F filings show the funds’ and investors’ portfolio positions as of September 30th. In this article we look at what those investors think of Cimpress NV (NASDAQ:CMPR).

Hedge fund interest in Cimpress NV (NASDAQ:CMPR) shares was flat at the end of last quarter. This is usually a negative indicator. At the end of this article we will also compare CMPR to other stocks including TFS Financial Corporation (NASDAQ:TFSL), ProShares UltraPro QQQ (NASDAQ:TQQQ), and Coherent, Inc. (NASDAQ:COHR) to get a better sense of its popularity.

At the end of the third quarter, a total of 17 of the hedge funds tracked by Insider Monkey held long positions in this stock, no change from the previous quarter. The graph below displays the number of hedge funds with bullish position in CMPR over the last 13 quarters. With the smart money’s positions undergoing their usual ebb and flow, there exists an “upper tier” of notable hedge fund managers who were boosting their stakes meaningfully (or already accumulated large positions). 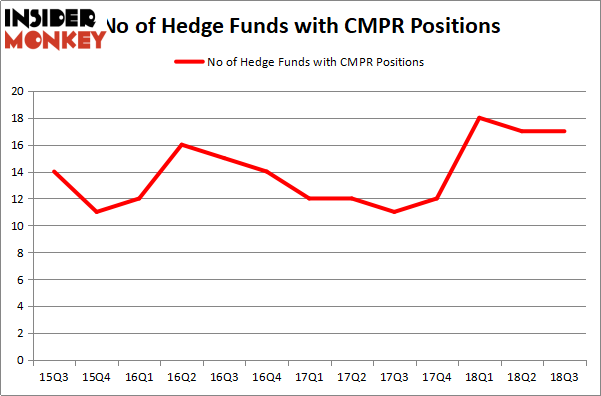 More specifically, Arlington Value Capital was the largest shareholder of Cimpress NV (NASDAQ:CMPR), with a stake worth $206.9 million reported as of the end of September. Trailing Arlington Value Capital was Cantillon Capital Management, which amassed a stake valued at $162.9 million. Cantillon Capital Management, D E Shaw, and CAS Investment Partners were also very fond of the stock, giving the stock large weights in their portfolios.

Due to the fact that Cimpress NV (NASDAQ:CMPR) has faced declining sentiment from hedge fund managers, we can see that there were a few hedgies that slashed their entire stakes by the end of the third quarter. Intriguingly, Joel Greenblatt’s Gotham Asset Management dumped the largest position of all the hedgies followed by Insider Monkey, comprising close to $2.6 million in stock, and Edward Goodnow’s Goodnow Investment Group was right behind this move, as the fund dumped about $1.7 million worth. These bearish behaviors are intriguing to say the least, as total hedge fund interest stayed the same (this is a bearish signal in our experience).

As you can see these stocks had an average of 11 hedge funds with bullish positions and the average amount invested in these stocks was $125 million. That figure was $661 million in CMPR’s case. MAXIMUS, Inc. (NYSE:MMS) is the most popular stock in this table. On the other hand ProShares UltraPro QQQ (NASDAQ:TQQQ) is the least popular one with only 2 bullish hedge fund positions. Cimpress NV (NASDAQ:CMPR) is not the most popular stock in this group but hedge fund interest is still above average. This is a slightly positive signal but we’d rather spend our time researching stocks that hedge funds are piling on. In this regard MMS might be a better candidate to consider a long position.