We at Insider Monkey have gone over 700 13F filings that hedge funds and prominent investors are required to file by the SEC. The 13F filings show the funds’ and investors’ portfolio positions as of December 31st. In this article we look at what those investors think of Charter Communications, Inc. (NASDAQ:CHTR).

Is Charter Communications, Inc. (NASDAQ:CHTR) a great investment now? The smart money is selling. The number of bullish hedge fund bets were trimmed by 3 in recent months. Our calculations also showed that CHTR isn’t among the 30 most popular stocks among hedge funds. Two and a half years ago Charter was one of the most popular stocks among hedge funds, but hedge fund sentiment towards the stock has been on a decline since then.

To most market participants, hedge funds are assumed to be worthless, old investment vehicles of years past. While there are greater than 8000 funds trading at the moment, We hone in on the elite of this group, around 750 funds. It is estimated that this group of investors command most of the smart money’s total asset base, and by shadowing their first-class investments, Insider Monkey has figured out a number of investment strategies that have historically defeated the broader indices. Insider Monkey’s flagship hedge fund strategy outstripped the S&P 500 index by nearly 5 percentage points annually since its inception in May 2014 through early November 2018. We were able to generate large returns even by identifying short candidates. Our portfolio of short stocks lost 27.5% since February 2017 (through March 12th) even though the market was up nearly 25% during the same period. We just shared a list of 6 short targets in our latest quarterly update and they are already down an average of 6% in less than a month.

How have hedgies been trading Charter Communications, Inc. (NASDAQ:CHTR)?

Heading into the first quarter of 2019, a total of 64 of the hedge funds tracked by Insider Monkey were long this stock, a change of -4% from the second quarter of 2018. Below, you can check out the change in hedge fund sentiment towards CHTR over the last 14 quarters. With the smart money’s positions undergoing their usual ebb and flow, there exists an “upper tier” of notable hedge fund managers who were adding to their holdings considerably (or already accumulated large positions). 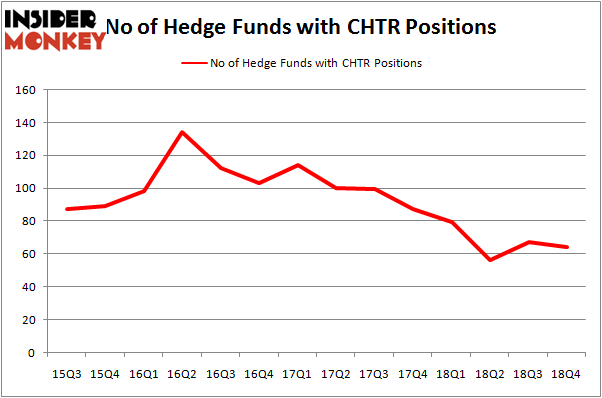 Of the funds tracked by Insider Monkey, Berkshire Hathaway, managed by Warren Buffett, holds the biggest position in Charter Communications, Inc. (NASDAQ:CHTR). Berkshire Hathaway has a $2.0043 billion position in the stock, comprising 1.1% of its 13F portfolio. Coming in second is Egerton Capital Limited, managed by John Armitage, which holds a $668.1 million position; 5.6% of its 13F portfolio is allocated to the company. Other members of the smart money that are bullish comprise Farallon Capital, John H. Scully’s SPO Advisory Corp and Robert Rodriguez and Steven Romick’s First Pacific Advisors LLC.

Seeing as Charter Communications, Inc. (NASDAQ:CHTR) has experienced a decline in interest from the entirety of the hedge funds we track, it’s safe to say that there lies a certain “tier” of hedge funds that slashed their positions entirely by the end of the third quarter. Interestingly, Larry Robbins’s Glenview Capital sold off the biggest investment of the 700 funds monitored by Insider Monkey, totaling an estimated $203.9 million in stock, and David Goel and Paul Ferri’s Matrix Capital Management was right behind this move, as the fund said goodbye to about $73.3 million worth. These transactions are interesting, as aggregate hedge fund interest fell by 3 funds by the end of the third quarter.

As you can see these stocks had an average of 25.5 hedge funds with bullish positions and the average amount invested in these stocks was $601 million. That figure was $6572 million in CHTR’s case. Walgreens Boots Alliance Inc (NASDAQ:WBA) is the most popular stock in this table. On the other hand Mitsubishi UFJ Financial Group Inc (NYSE:MUFG) is the least popular one with only 9 bullish hedge fund positions. Compared to these stocks Charter Communications, Inc. (NASDAQ:CHTR) is more popular among hedge funds. So, even though some hedge funds are selling their CHTR holdings, the stock is still very popular relative to similarly valued stocks. Our calculations showed that top 15 most popular stocks among hedge funds returned 19.7% through March 15th and outperformed the S&P 500 ETF (SPY) by 6.6 percentage points. Hedge funds were also right about betting on Charter as the stock returned 24.9% and outperformed the market as well.