Did Hedge Funds Drop The Ball On CBIZ, Inc. (CBZ)?

How do you pick the next stock to invest in? One way would be to spend days of research browsing through thousands of publicly traded companies. However, an easier way is to look at the stocks that smart money investors are collectively bullish on. Hedge funds and other institutional investors usually invest large amounts of capital and have to conduct due diligence while choosing their next pick. They don’t always get it right, but, on average, their stock picks historically generated strong returns after adjusting for known risk factors. With this in mind, let’s take a look at the recent hedge fund activity surrounding CBIZ, Inc. (NYSE:CBZ).

Is CBIZ, Inc. (NYSE:CBZ) a buy, sell, or hold? The smart money is becoming less confident. The number of bullish hedge fund positions were cut by 2 in recent months. Our calculations also showed that CBZ isn’t among the 30 most popular stocks among hedge funds (see the video below). CBZ was in 14 hedge funds’ portfolios at the end of the second quarter of 2019. There were 16 hedge funds in our database with CBZ holdings at the end of the previous quarter. 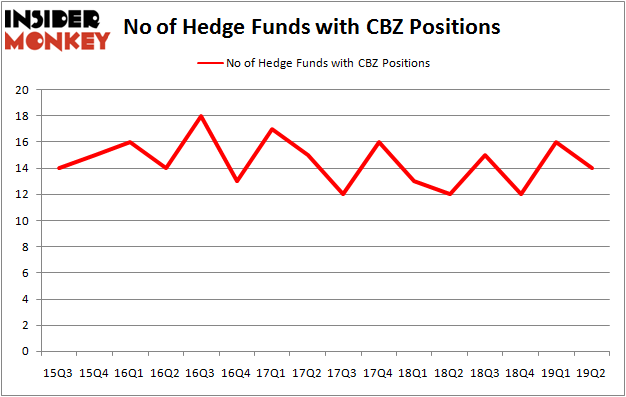 At the end of the second quarter, a total of 14 of the hedge funds tracked by Insider Monkey held long positions in this stock, a change of -13% from the first quarter of 2019. The graph below displays the number of hedge funds with bullish position in CBZ over the last 16 quarters. So, let’s review which hedge funds were among the top holders of the stock and which hedge funds were making big moves.

The largest stake in CBIZ, Inc. (NYSE:CBZ) was held by Cardinal Capital, which reported holding $61.3 million worth of stock at the end of March. It was followed by P2 Capital Partners with a $52.8 million position. Other investors bullish on the company included Renaissance Technologies, D E Shaw, and AQR Capital Management.

Since CBIZ, Inc. (NYSE:CBZ) has experienced bearish sentiment from the entirety of the hedge funds we track, it’s easy to see that there were a few hedge funds who were dropping their entire stakes by the end of the second quarter. Interestingly, Andrew Feldstein and Stephen Siderow’s Blue Mountain Capital said goodbye to the largest investment of all the hedgies watched by Insider Monkey, valued at close to $0.3 million in stock. Bruce Kovner’s fund, Caxton Associates LP, also cut its stock, about $0.2 million worth. These moves are interesting, as total hedge fund interest was cut by 2 funds by the end of the second quarter.

As you can see these stocks had an average of 10 hedge funds with bullish positions and the average amount invested in these stocks was $102 million. That figure was $150 million in CBZ’s case. BrightSphere Investment Group Inc. (NYSE:BSIG) is the most popular stock in this table. On the other hand Hess Midstream Partners LP (NYSE:HESM) is the least popular one with only 6 bullish hedge fund positions. CBIZ, Inc. (NYSE:CBZ) is not the most popular stock in this group but hedge fund interest is still above average. Our calculations showed that top 20 most popular stocks among hedge funds returned 24.4% in 2019 through September 30th and outperformed the S&P 500 ETF (SPY) by 4 percentage points. Hedge funds were also right about betting on CBZ as the stock returned 20% during the third quarter and outperformed the market. Hedge funds were rewarded for their relative bullishness.