A whopping number of 13F filings filed with U.S. Securities and Exchange Commission has been processed by Insider Monkey so that individual investors can look at the overall hedge fund sentiment towards the stocks included in their watchlists. These freshly-submitted public filings disclose money managers’ equity positions as of the end of the three-month period that ended June 28, so let’s proceed with the discussion of the hedge fund sentiment on Cavco Industries, Inc. (NASDAQ:CVCO).

Cavco Industries, Inc. (NASDAQ:CVCO) has seen a decrease in activity from the world’s largest hedge funds in recent months. CVCO was in 16 hedge funds’ portfolios at the end of June. There were 19 hedge funds in our database with CVCO holdings at the end of the previous quarter. Our calculations also showed that CVCO isn’t among the 30 most popular stocks among hedge funds (see the video below).

According to most market participants, hedge funds are viewed as unimportant, old financial tools of the past. While there are greater than 8000 funds trading today, Our experts choose to focus on the top tier of this club, about 750 funds. It is estimated that this group of investors administer the majority of the hedge fund industry’s total asset base, and by keeping an eye on their first-class picks, Insider Monkey has unearthed a few investment strategies that have historically outpaced the market. Insider Monkey’s flagship hedge fund strategy outperformed the S&P 500 index by around 5 percentage points per year since its inception in May 2014. We were able to generate large returns even by identifying short candidates. Our portfolio of short stocks lost 25.7% since February 2017 (through September 30th) even though the market was up more than 33% during the same period. We just shared a list of 10 short targets in our latest quarterly update . 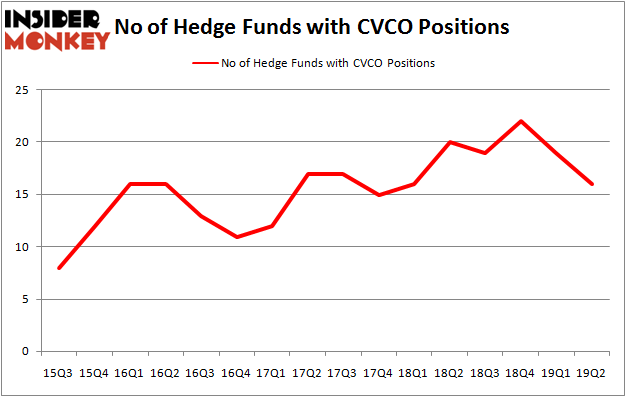 Heading into the third quarter of 2019, a total of 16 of the hedge funds tracked by Insider Monkey held long positions in this stock, a change of -16% from the previous quarter. By comparison, 20 hedge funds held shares or bullish call options in CVCO a year ago. With hedge funds’ sentiment swirling, there exists a few key hedge fund managers who were increasing their stakes significantly (or already accumulated large positions).

According to publicly available hedge fund and institutional investor holdings data compiled by Insider Monkey, Mario Gabelli’s GAMCO Investors has the biggest position in Cavco Industries, Inc. (NASDAQ:CVCO), worth close to $44.5 million, amounting to 0.3% of its total 13F portfolio. The second largest stake is Renaissance Technologies, with a $24.8 million position; less than 0.1%% of its 13F portfolio is allocated to the company. Other hedge funds and institutional investors that are bullish comprise Jeffrey Gendell’s Tontine Asset Management, Richard Scott Greeder’s Broad Bay Capital and Chuck Royce’s Royce & Associates.

Judging by the fact that Cavco Industries, Inc. (NASDAQ:CVCO) has witnessed bearish sentiment from the smart money, it’s safe to say that there were a few hedgies that slashed their full holdings heading into Q3. It’s worth mentioning that John Khoury’s Long Pond Capital said goodbye to the biggest position of the 750 funds monitored by Insider Monkey, valued at an estimated $10.1 million in stock, and D. E. Shaw’s D E Shaw was right behind this move, as the fund cut about $1.6 million worth. These bearish behaviors are intriguing to say the least, as total hedge fund interest fell by 3 funds heading into Q3.

As you can see these stocks had an average of 8.75 hedge funds with bullish positions and the average amount invested in these stocks was $76 million. That figure was $136 million in CVCO’s case. Air Transport Services Group Inc. (NASDAQ:ATSG) is the most popular stock in this table. On the other hand Rush Enterprises, Inc. (NASDAQ:RUSHB) is the least popular one with only 2 bullish hedge fund positions. Compared to these stocks Cavco Industries, Inc. (NASDAQ:CVCO) is more popular among hedge funds. Our calculations showed that top 20 most popular stocks among hedge funds returned 24.4% in 2019 through September 30th and outperformed the S&P 500 ETF (SPY) by 4 percentage points. Hedge funds were also right about betting on CVCO as the stock returned 21.9% during Q3 and outperformed the market by an even larger margin. Hedge funds were clearly right about piling into this stock relative to other stocks with similar market capitalizations.