Is Brookfield Property REIT Inc. (NASDAQ:BPR) ready to rally soon? The smart money is in a bearish mood. The number of long hedge fund positions fell by 6 in recent months. Our calculations also showed that BPR isn’t among the 30 most popular stocks among hedge funds. BPR was in 14 hedge funds’ portfolios at the end of the fourth quarter of 2018. There were 20 hedge funds in our database with BPR holdings at the end of the previous quarter.

Heading into the first quarter of 2019, a total of 14 of the hedge funds tracked by Insider Monkey held long positions in this stock, a change of -30% from the previous quarter. On the other hand, there were a total of 0 hedge funds with a bullish position in BPR a year ago. With hedgies’ capital changing hands, there exists a few noteworthy hedge fund managers who were upping their stakes substantially (or already accumulated large positions). 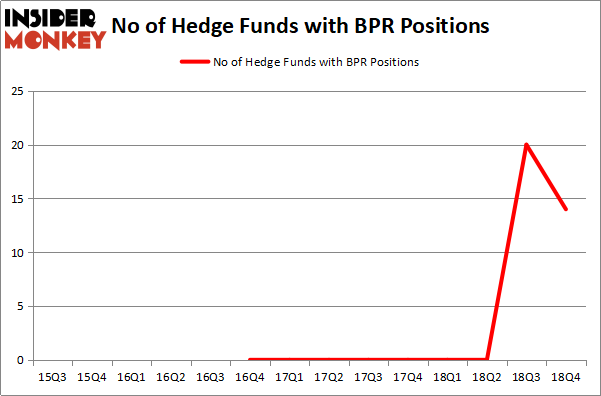 Because Brookfield Property REIT Inc. (NASDAQ:BPR) has experienced declining sentiment from the aggregate hedge fund industry, we can see that there was a specific group of funds that slashed their positions entirely by the end of the third quarter. Intriguingly, Thomas Steyer’s Farallon Capital dumped the biggest investment of the 700 funds monitored by Insider Monkey, totaling close to $168.6 million in stock. Richard Gerson and Navroz D. Udwadia’s fund, Falcon Edge Capital, also cut its stock, about $26.4 million worth. These bearish behaviors are interesting, as aggregate hedge fund interest fell by 6 funds by the end of the third quarter.

As you can see these stocks had an average of 16.25 hedge funds with bullish positions and the average amount invested in these stocks was $242 million. That figure was $144 million in BPR’s case. Blueprint Medicines Corporation (NASDAQ:BPMC) is the most popular stock in this table. On the other hand FirstService Corporation (TSE:FSV) is the least popular one with only 13 bullish hedge fund positions. Brookfield Property REIT Inc. (NASDAQ:BPR) is not the least popular stock in this group but hedge fund interest is still below average. Our calculations showed that top 15 most popular stocks) among hedge funds returned 24.2% through April 22nd and outperformed the S&P 500 ETF (SPY) by more than 7 percentage points. A small number of hedge funds were also right about betting on BPR as the stock returned 31.4% and outperformed the market by an even larger margin.