Did Hedge Funds Drop The Ball On Brady Corporation (BRC) ?

Hedge Funds and other institutional investors have just completed filing their 13Fs with the Securities and Exchange Commission, revealing their equity portfolios as of the end of June. At Insider Monkey, we follow nearly 750 active hedge funds and notable investors and by analyzing their 13F filings, we can determine the stocks that they are collectively bullish on. One of their picks is Brady Corporation (NYSE:BRC), so let’s take a closer look at the sentiment that surrounds it in the current quarter.

Brady Corporation (NYSE:BRC) was in 13 hedge funds’ portfolios at the end of the second quarter of 2019. BRC has seen a decrease in hedge fund interest of late. There were 15 hedge funds in our database with BRC holdings at the end of the previous quarter. Our calculations also showed that BRC isn’t among the 30 most popular stocks among hedge funds (view the video below).

In today’s marketplace there are plenty of signals investors use to assess stocks. Some of the most useful signals are hedge fund and insider trading moves. We have shown that, historically, those who follow the best picks of the elite hedge fund managers can outclass their index-focused peers by a healthy margin (see the details here).

How have hedgies been trading Brady Corporation (NYSE:BRC)? 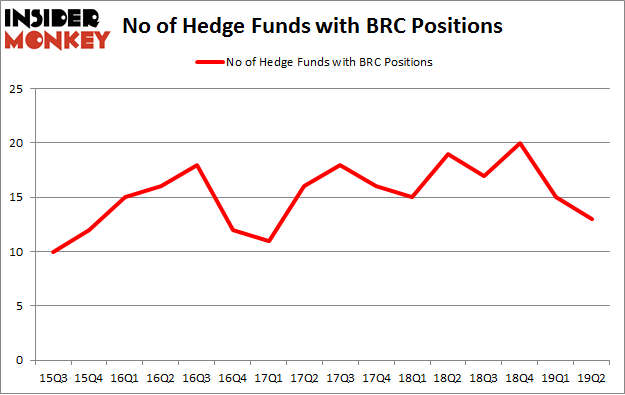 The largest stake in Brady Corporation (NYSE:BRC) was held by Renaissance Technologies, which reported holding $105.6 million worth of stock at the end of March. It was followed by Ariel Investments with a $54.6 million position. Other investors bullish on the company included GLG Partners, D E Shaw, and Two Sigma Advisors.

Due to the fact that Brady Corporation (NYSE:BRC) has witnessed a decline in interest from the aggregate hedge fund industry, it’s safe to say that there were a few funds who sold off their entire stakes last quarter. At the top of the heap, David Costen Haley’s HBK Investments sold off the biggest position of the “upper crust” of funds tracked by Insider Monkey, comprising about $1.6 million in stock. Michael Gelband’s fund, ExodusPoint Capital, also dumped its stock, about $0.3 million worth. These moves are intriguing to say the least, as aggregate hedge fund interest fell by 2 funds last quarter.

As you can see these stocks had an average of 15.5 hedge funds with bullish positions and the average amount invested in these stocks was $213 million. That figure was $189 million in BRC’s case. Intercept Pharmaceuticals Inc (NASDAQ:ICPT) is the most popular stock in this table. On the other hand First Interstate Bancsystem Inc (NASDAQ:FIBK) is the least popular one with only 11 bullish hedge fund positions. Brady Corporation (NYSE:BRC) is not the least popular stock in this group but hedge fund interest is still below average. Our calculations showed that top 20 most popular stocks among hedge funds returned 24.4% in 2019 through September 30th and outperformed the S&P 500 ETF (SPY) by 4 percentage points. A small number of hedge funds were also right about betting on BRC as the stock returned 8% during the same time frame and outperformed the market by an even larger margin.