Did Hedge Funds Drop The Ball On Avista Corp (AVA)?

Avista Corp (NYSE:AVA) shareholders have witnessed a decrease in enthusiasm from smart money recently. AVA was in 11 hedge funds’ portfolios at the end of the second quarter of 2019. There were 18 hedge funds in our database with AVA holdings at the end of the previous quarter. Our calculations also showed that AVA isn’t among the 30 most popular stocks among hedge funds (view the video below).

What have hedge funds been doing with Avista Corp (NYSE:AVA)?

Heading into the third quarter of 2019, a total of 11 of the hedge funds tracked by Insider Monkey were long this stock, a change of -39% from one quarter earlier. The graph below displays the number of hedge funds with bullish position in AVA over the last 16 quarters. With hedgies’ sentiment swirling, there exists an “upper tier” of key hedge fund managers who were upping their holdings substantially (or already accumulated large positions). 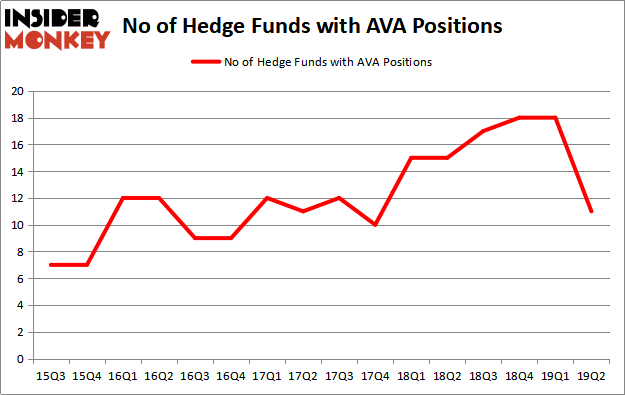 The largest stake in Avista Corp (NYSE:AVA) was held by Renaissance Technologies, which reported holding $79.9 million worth of stock at the end of March. It was followed by D E Shaw with a $23 million position. Other investors bullish on the company included GLG Partners, Millennium Management, and Weld Capital Management.

Since Avista Corp (NYSE:AVA) has faced a decline in interest from hedge fund managers, logic holds that there were a few hedge funds that elected to cut their full holdings heading into Q3. Intriguingly, Alec Litowitz and Ross Laser’s Magnetar Capital dropped the biggest stake of the 750 funds tracked by Insider Monkey, worth about $11.6 million in stock. Peter Rathjens, Bruce Clarke and John Campbell’s fund, Arrowstreet Capital, also dropped its stock, about $10.3 million worth. These bearish behaviors are intriguing to say the least, as total hedge fund interest fell by 7 funds heading into Q3.

As you can see these stocks had an average of 13.75 hedge funds with bullish positions and the average amount invested in these stocks was $307 million. That figure was $144 million in AVA’s case. Kennametal Inc. (NYSE:KMT) is the most popular stock in this table. On the other hand Gol Linhas Aereas Inteligentes SA (NYSE:GOL) is the least popular one with only 8 bullish hedge fund positions. Avista Corp (NYSE:AVA) is not the least popular stock in this group but hedge fund interest is still below average. Our calculations showed that top 20 most popular stocks among hedge funds returned 24.4% in 2019 through September 30th and outperformed the S&P 500 ETF (SPY) by 4 percentage points. A small number of hedge funds were also right about betting on AVA as the stock returned 9.5% during the same time frame and outperformed the market by an even larger margin.