Did Hedge Funds Drop The Ball On AutoNation, Inc. (AN) ?

Is AutoNation, Inc. (NYSE:AN) a good stock to buy right now? We at Insider Monkey like to examine what billionaires and hedge funds think of a company before spending days of research on it. Given their 2 and 20 payment structure, hedge funds have more incentives and resources than the average investor. The funds have access to expert networks and get tips from industry insiders. They also have numerous Ivy League graduates and MBAs. Like everyone else, hedge funds perform miserably at times, but their consensus picks have historically outperformed the market after risk adjustments.

Is AutoNation, Inc. (NYSE:AN) a safe investment today? Prominent investors are taking an optimistic view. The number of long hedge fund bets rose by 1 in recent months. Our calculations also showed that AN isn’t among the 30 most popular stocks among hedge funds (view the video below).

To the average investor there are plenty of tools investors have at their disposal to size up stocks. A duo of the most useful tools are hedge fund and insider trading indicators. We have shown that, historically, those who follow the top picks of the top money managers can beat the S&P 500 by a healthy margin (see the details here).

How have hedgies been trading AutoNation, Inc. (NYSE:AN)? 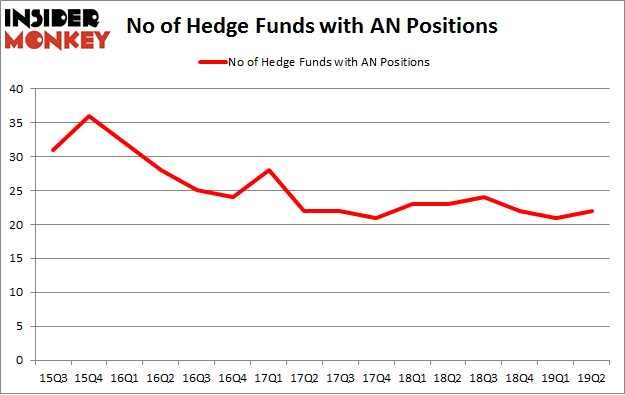 Of the funds tracked by Insider Monkey, ESL Investments, managed by Edward Lampert, holds the largest position in AutoNation, Inc. (NYSE:AN). ESL Investments has a $147.9 million position in the stock, comprising 63.4% of its 13F portfolio. Coming in second is Arlington Value Capital, led by Allan Mecham and Ben Raybould, holding a $142 million position; 9.6% of its 13F portfolio is allocated to the stock. Some other hedge funds and institutional investors with similar optimism include Mario Gabelli’s GAMCO Investors, Ken Griffin’s Citadel Investment Group and D. E. Shaw’s D E Shaw.

Now, key money managers have been driving this bullishness. Renaissance Technologies established the largest position in AutoNation, Inc. (NYSE:AN). Renaissance Technologies had $11 million invested in the company at the end of the quarter. Charles Davidson and Joseph Jacobs’s Wexford Capital also made a $4.8 million investment in the stock during the quarter. The following funds were also among the new AN investors: Joel Greenblatt’s Gotham Asset Management, Paul Tudor Jones’s Tudor Investment Corp, and Michael Platt and William Reeves’s BlueCrest Capital Mgmt..

As you can see these stocks had an average of 20.75 hedge funds with bullish positions and the average amount invested in these stocks was $331 million. That figure was $403 million in AN’s case. Perspecta Inc. (NYSE:PRSP) is the most popular stock in this table. On the other hand China Biologic Products Holdings, Inc. (NASDAQ:CBPO) is the least popular one with only 9 bullish hedge fund positions. AutoNation, Inc. (NYSE:AN) is not the most popular stock in this group but hedge fund interest is still above average. Our calculations showed that top 20 most popular stocks among hedge funds returned 24.4% in 2019 through September 30th and outperformed the S&P 500 ETF (SPY) by 4 percentage points. Hedge funds were also right about betting on AN as the stock returned 20.9% during the third quarter and outperformed the market. Hedge funds were rewarded for their relative bullishness.